In September 2019 millions of workers and students around the world walked out of their schools and off their jobs to protest governments’ inaction on climate change. For the protesters, the consequences of global warming were all too apparent. Last year Australia’s Black Summer bushfires brought destruction and death, killing hundreds of millions of animals. Hotter conditions have triggered record-setting ice melt, heat waves, low crop yields and bleached reefs—and have even, some argue, set the scene for the novel coronavirus pandemic. Scientists have known for decades that climate change would spur dire outcomes. But in the past several years we have gained a better scientific understanding of when, where and how the impacts of global warming are being felt.

To catch up on the basics, this issue opens with a useful primer on what’s happening to our planet—and dispels the tiresome arguments made by climate change deniers. Accelerating rates of Arctic ice melting promise to raise sea levels and displace millions, and thawing permafrost threatens to double the warming that has already occurred.

The impacts on human society are unavoidable. Hotter air manipulates jet streams and weather patterns and fuels more extreme storms. Intensified floods, droughts and storms alter how and where people live and how diseases spread among us. Shifting climatic conditions force human emigrations and boost geopolitical tensions among nation-states.

The changes will affect nearly every species on earth. As the oceans absorb carbon dioxide from the air, the waters acidify and imperil creatures therein. Biologists are breeding heat-tolerant corals for transplantation to the most endangered reefs. The reproductive and migration patterns of Arctic plants and animals continue to shift, and to help threatened trees, dendrologists have developed a type of human-controlled artificial selection that pinpoints species better able to survive.

The specter of climate change is frightening, but we’ve also learned more about effective mitigation strategies. Urban design can ease the release of CO2 and other harmful human outputs. Stronger policies that disincentivize fossil-fuel harvesting and place a smart tax on carbon can help us put a dent in U.S. emissions. To avoid the worst outcomes, we will likely still need to extract some CO2 from the atmosphere, and innovative technologies are emerging to answer the call.

We can’t mobilize these solutions soon enough. A recent report from the National Bureau of Economic Research stated that financial suffering as a result of climate change will be widespread—damaging infrastructure, gutting labor productivity and affecting agricultural yields for the worse. We’re facing a complete reordering of the earth’s ecosystems and the human societies that depend on them. No doubt remains about the problems that face our planet. But how, or if, we fix them is entirely up to us.

This article was originally published with the title "Our Planet, Our Choice" in SA Special Editions 29, 3s, 1 (August 2020) 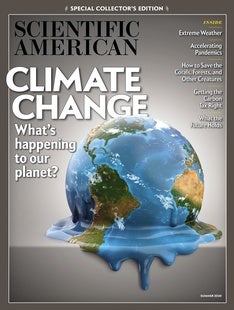