The July number of the North American Review says, in reference to the havoc made among the oysters by the star fish in the harbor of New York and its vicinity, that the loss has been estimated at many thousands of dollars, and the proprietors of oyster beds have petitioned the State to remit the tax upon them, asserting that unless some way is found to check the ravages of these animals, the oyster is in danger of becoming extinct in many localities where they are now abundant. The ancients believed that the star fish cunningly inserted one of its rays between the valves, nnd thus gradually destroyed its victim ; but modern observation has determined that its mode of attack is very different. If the oyster is a large bivalve (one that would make the mouth of a crustacean epicure water), four or five asterise attach themselves to it, and waiting patiently until the mollusk opens his shell, intrude between the valves their stomachs, which first, for a greater convenience, they turn inside out. A liquid is supposed to be secreted by the stomach .which acts as an opiate upon the oyster, who no conger possesses the power to close his doors against the intrnder, and thus bec9mes an easy prey to these burglars-of the deep. It is to be hoped that the true lover of the delicious oyster, particularly thOle who are accustomed to study the radiata ofthe aquarium, will devise some plan to enable the bivalve to retain peaceful possession of his own house until he is forcibly ejected for the benefit of the lords of creation. VAOCINATION.—Too much importance cannot be attached to this great specific against smallpox. In one district in England (so says one of its journals), out of 1,536 deaths 419 have arisen from this terrible disease, a circumstance which requires great and immediate attention; for the large percentage of deaths above alluded to are but a portion which take place in this country annually ; and it is to be feared that, if proper means are not taken, the number which is at present 80 large will soon be increased. BLACK TONGUE.—A correspondent residing at Ho well, Mich., informs us that a disease called the " black tongue " is prevailing in that section, and abo that he has noticed that a similar disease is attacking the cattle in the southern States. He says his own experience is that not one in ten of the animals wlll die if they are permitted to chew coarse salt—the coarser the better. This is a harmlesd remedy, and should be tried. A GOOD map of the Submarine Telegraph between America and Europe, well colored, and the Arctic's soundings attached, is sol ' by McKee & Still well. 89 Nassau street, New York. Price 10 cents.

This article was originally published with the title "Oysters and Star Fish" in Scientific American 13, 50, 395 (August 1858) 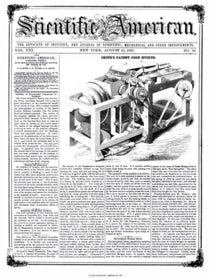