To outsiders, the field of physics may seem like a neat and tidy affair. What fundamental discoveries are left to make, right? Wrong. In fact, physicists are pushing into the extreme ends of the universe as we know it—from invisible particles and colliding massive black holes to the most crushing gravitational forces ever detected and spooky quantum entanglement. The 14-billion-year-old tale of our universe is far from over.

Innovative projects are hunting the smallest units of matter. Scientists at CERN's Large Hadron Collider have set their sights on “virtual” particles that seem to pop in and out of existence and defy the laws of physics. And soon the largest experiment of its kind will beam minuscule neutrinos underground from Illinois to South Dakota, with luck demonstrating how these mysterious particles buck the Standard Model.

On the larger scales of physics, the detection in 2015 of two black holes crashing together some 1.3 billion light-years away launched a wave of discovery, and new data are rolling in at a frequency of months rather than years. Meanwhile the debate rages over whether invisible particles indeed make up the dark matter that fills the entire universe or whether we need to revise what we know about how gravity works altogether.

Thanks to new gravitational-wave detectors, we are finally getting a clearer picture of some of the densest places in existence; the core of neutron stars may prove to be a goopy superfluid. An alternative theory posits that rather than arising from dead stars, the earliest black holes materialized out of clouds of dust.

Quantum theory continues to captivate; theorists are trying to get their head around the ramifications of a multiverse—that is, do infinite worlds coexist in a statistical “probability space,” or do too many universes violate the laws of physics entirely? The next phase of quantum research will attempt to put living organisms into superposition, probing for where precisely scientists can observe quantum effects.

Perhaps more than any other field, physics requires a churning of old ideas, either modulating them to explain the latest observations or scrapping them altogether. Much of its work is done in the human mind as Gedankenexperiments, or “thought experiments,” as Albert Einstein called them. For this reason, Sabine Hossenfelder writes, there is a fine, often blurry line between scientific intuition and fantasy. But there seems to be no finish line of discovery, even on the distant horizon.

This article was originally published with the title "Physics at the Limits" in SA Special Editions 28, 2s, 1 (April 2019) 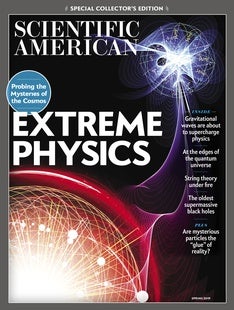