In the moments after the big bang, spacetime expanded so rapidly that, in addition to our own, many—maybe infinite— universes exploded into existence (I envision these universes as bubbles that surge up when you blow air through a straw into your glass). So goes the “multiverse” component of string theory. To be sure, the multiverse is decidedly centered in the pop physics zeitgeist, capturing the minds of the public in books, comics and film. Now a view of string theory posits that the infinite number of universes predicted cannot accommodate the stable dark energy required in any universe. But this may not necessarily be a bad thing for string theory research. Read more in “String Theory May Create Far Fewer Universes Than Thought,” by Clara Moskowitz. For better or worse, ours may be a more singular universe after all.

Elsewhere in this issue, scientists worry that human exploration of the solar system may unwittingly spread our pathogens to other worlds, possibly to the moon or Mars (see “Should the Moon Be Quarantined?” by David Warmflash). And physics experiments in search of a fundamental particle of gravity—the graviton—are employing some new tools such as microscopic superconductors, free-falling crystals and the cosmic background radiation (see “Is Gravity Quantum?” by Charles Q. Choi).

As always, we’d love to hear what you think!

This article was originally published with the title "Problems with the Multiverse" in SA Space & Physics 1, 4, (October 2018) 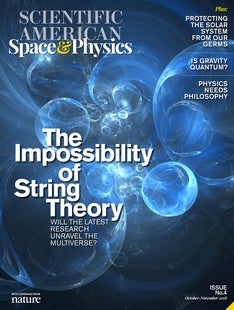