In several parts of the vorld there is no rain at all. In the Old World there are two districts of this kind : the Desert of Sahara in Africa, and in Asia part of Arabia, Syria, and Persia ; th'e other district lies between north latitude 30 and 60, and between 75 and 118 of east longitude, including Thibet, Gobiar, Shama, and Mongolia. In the New World the rainless districts are of much less magnitude, occupying two narrow strips on the shores of Peru and Bolivia, and on the coast of Mexico and Guatemala, with a small district between Trinidad -and Panama on the coast of "Venezuela. Per contrathe climate of the Khasia Mountains, which lie northeast from Calcutta, is most remarkable for the excessive fall of rain. An English traveler established the fact that in th'e month of August, 1841, there fell 264 inches of rain. This great rain fall is attributed to the abruptness of the mountains that face the Bay of Bengal and the intervening flat swamp 200 miles in extent. It is not easy always to account for the erratic conduct of the weather upon any established scientific theory, for it is asserted that there is a district in Siberia in which, during "winter, the sky is constantly clear, and where a particle of snow never faUs. THE ROOT STEAM EUGIUB COMPAUT are placing in the Fair of the American Institute, one of their 120-horse power boilers, which is exciting considerable interest among steam engineers. For safety and economy of fuel, large claims are made by the manufacturers. The Company is now composed of some of our shrewdest business men, who have placed 1 sufficient capital at their disposal to enable them to fill extensive orders.

This article was originally published with the title "Rainless Districts—Freaks of the Weather" in Scientific American 21, 13, 202 (September 1869) 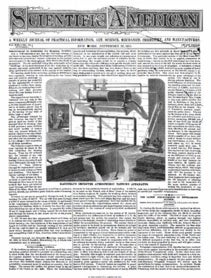