WHEN refacing the valve seats of an automobile engine, it is usually the practice to make a reamer out of cast steel and temper and grind it to she. This is rather a tedious task and somewhat expensive. Recently a friend of the writer found it necessary to reface the valve seats of his four-cylinder automobile engine, which meant that there were eight valves to be treated. Instead of adopting the usual method, the. writer suggested that' he make his reamer of soft steel, and fit it with cutting edges by sawing through the beveled edge of the reamer with a hack saw in four places and driving in four pieces of clocl:spring. These cutters were filed down nearly to the surface of the reamer. The bevel was finished in the lathe. with the grinder, allowing the clock spring strips to project about 0.02 of an inch, or less, from the surface. Small grooves were filed in the reamer in front of the cutting edges to allow for clearance of chips. The lower end of the reamer was made to fit nicely in the guide for the valve seat. One of the plugs in the engine directly over the valve was bored out to fit the upper part of the reamer. This plug not only held the reamer accurately, but also acted as a feed; for it could be screwed down as the reamer was revolved. The eight seats were refaced with perfect ease, the last one cutting as well as the others. When the work was completed, the hole. bored in the plug was stopped up with a piece of metal, and the plug was replaced in the engine for service. The valves were placed in the lathe and faced off enough to true them, after which they were inserted in the engine and ground to a fit with powdered glass and oil.

This article was originally published with the title "Refacing Valve Seats" in Scientific American 105, 15, 317 (October 1911) 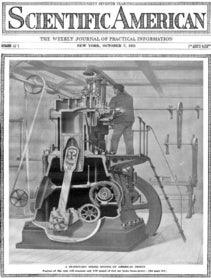