Given the billions of food items that are packaged, purchased and consumed every day in the U.S., let alone the world, it is remarkable how few of them are contaminated. Yet since the terrorist attacks of September 11, 2001, “food defense” experts have grown increasingly worried that extremists might try to poison the food supply, either to kill people or to cripple the economy by undermining public confidence. At the same time, production of edible products is becoming ever more centralized, speeding the spread of contaminants—natural ones or those introduced purposely—from farms or processing plants to dinner tables everywhere. Mounting imports pose yet another rising risk.

Can we protect food from tainting? And if toxic substances or pathogens do slip into the supply chain, can they be quickly detected to limit their harm to consumers? Tighter production procedures can go a long way toward protecting the public, and if they fail, smarter monitoring technologies can at least limit injury.

Tighten security
Preventing a terrorist or a disgruntled employee from contaminating milk, juice, produce, meat or any other type of comestible is a daunting problem. The food supply chain comprises a maze of steps, and virtually every one of them presents an opportunity for tampering. Blanket solutions are unlikely to work because “the chain differs from commodity to commodity,” says David Hennessy, an economics professor at Iowa State University's Center for Agricultural and Rural Development. “Protecting dairy products is different from protecting apple juice, which is different from protecting beef.”

Even within a given supply chain, technology offers few quick fixes. Preventing contamination largely comes down to tightening physical plant security and processing procedures at every turn. Each farmer, rancher, processor, packager, shipper, wholesaler and retailer “has to identify every possible vulnerability in the facility and in its procedures and close up every hole,” says Frank Busta, director emeritus of the National Center for Food Protection and Defense at the University of Minnesota. The effort begins with standard facility access controls, which Busta often refers to as “gates, guns and guards,” but extends to thoroughly screening employees and carefully sampling products at all junctures across the facility at all times.

That advice seems sound, of course, but the challenge for operators is how best to button down procedures. Several systems for safeguarding food production have been rolled out in recent years. Although these are not required by any regulatory agency, Busta strongly recommends that producers implement them. In the U.S., that impetus was made stronger by legislation such as the 2002 Bioterrorism Act and a 2004 presidential directive, both of which enhanced scrutiny of ingredient suppliers and tightened control of manufacturing procedures.

The primary safeguard systems Busta recommends borrow from military practices. One tool, which the FDA and the U.S. Department of Agriculture are now using, carries the awkward name of CARVER+Shock. It was adapted from Defense Department procedures for identifying a military service's greatest vulnerabilities. “CARVER+Shock is essentially a complete security audit,” says Keith Schneider, a professor at the University of Florida's department of food science and human nutrition. The approach analyzes every node in the system for factors that range from the likely success of different kinds of attacks to the magnitude of public health, economic and psychological effects (together, the “shock” value) that a given type of infiltration could cause.

Track contaminants
No matter how tightly procedures might be controlled, determined perpetrators could still find ways to introduce pathogens or poisons. And natural pathogens such as Salmonella are always a concern. Detecting these agents, tracing them back to the spot of introduction, and tracking which grocery stores and restaurants ended up with tainted products are paramount. Putting such systems in place “is just as important as prevention,” Schneider says.

Here new technology does play a major role, with various sensors applied at different points along the chain. “You can't expect one technology to counter all the possible taintings for a given food,” notes Ken Lee, former director of Ohio State University's department of food science and technology.

A variety of hardware is being developed, although little has been deployed commercially thus far. Radio-frequency identification (RFID) tags are furthest along, in part because the Defense Department and Walmart have required their main suppliers to attach the tokens to pallets or cases of foodstuffs. The Metro AG supermarket chain in Germany has done the same. The ultimate intent is for automated readers to scan the tags at each step along the supply chain—from farm, orchard, ranch or processor, through packaging, shipping and wholesale—and to report each item's location to a central registry. That way if a problem surfaces, investigators can quickly determine where the batch originated and which stores or facilities might have received goods from that batch and when. Retailers can also read the tags on their items to see whether they received a product that was later identified as suspicious.

As RFID tags get smaller and cheaper, they may be placed directly on individual items—on every bag of spinach, jar of peanut butter, container of shrimp and sack of dog food. “That way if a recall is issued, the items can be found as they run past a scanner at the checkout counter,” says Jean-Pierre Émond, of the electro-optical systems laboratory at the Georgia Tech Research Institute.

Universities and companies are developing all kinds of other tags, some that are very inexpensive and others that cost more but supply extensive information. Some tokens, for example, can sense whether food has been exposed to warm temperatures and thus might be more likely to harbor Escherichia coli or Salmonella bacteria. Other tags could track how long items spent in transit from node to node in the supply chain, which could indicate unusually long delays that might raise suspicion about tampering. So-called active packaging could detect contamination directly and warn consumers not to eat the product they are holding.

The big impediment for any marker, of course, is the price. Today it costs around 15 cents to put an RFID tag on a case of lettuce. For some growers, Émond notes, that could equal the profit they are going to make on that case. To be embraced widely, therefore, he says tags will have to provide additional value to suppliers or buyers.

The University of Florida conducted a project with Publix Super Markets and produce suppliers in Florida and California to assess such possibilities. In initial trials, tags tracked crates and pallets that were shipped from the growers to several of Publix's distribution centers. Information gleaned from scanning tags at various points was available to all the companies via a secure Internet site hosted by VeriSign, the data security firm. The compilation allowed the participants to more quickly resolve order discrepancies, to log how long food sat idle and to reveal ways to raise shipping efficiency.

Control suppliers
Costs will not drop until new technologies are deployed widely. But food defense analysts say adoption is unlikely to occur until clear, streamlined regulations are enacted. And that prospect, in turn, seems likely to be remote until the highest levels of government are reformed.

“There are more than a dozen different federal agencies that oversee some aspect of food safety,” Lee points out, noting that simple coordination among them is difficult enough, and efficient approval of sensible requirements is even harder to come by. The FDA regulates pizza with cheese on it, but the usda regulates pizza if it has meat on it, quips Jacqueline Fletcher, a professor of entomology and plant pathology at Oklahoma State University. “The requirements for organic farmers are different from those for nonorganic farmers.”

Spurred by recalls and outbreaks, Congress passed the Food Safety Modernization Act in 2011, which directed the FDA to refocus its efforts on prevention of contamination rather than recalls of bad food, strengthen inspections of both domestically produced and imported foods [see box on opposite page], and make better use of risk analysis in setting its priorities. In February, the Obama administration proposed unifying responsibility for prevention of food contamination and response to outbreaks of foodborne illness in a new Food Safety Administration.

More effective government is good, but experts say food suppliers also need to improve vigilance. “The strongest tool for stopping intentional contamination is supply-chain verification,” says Shaun Kennedy, director of the National Center for Food Protection and Defense. Each brand-name provider such as Dole and each grocery store conglomerate such as Safeway must verify that every company involved in its supply chain implements the latest security procedures and detection, track and trace technologies—and drop those that do not.

Brand-name providers, after all, have the most to lose. If a natural or man-made toxin is found in, say, a bag of Dole spinach or a container of Safeway milk, consumers will shun that particular label. “If a brand-name company wants to protect its products,” Kennedy says, “it should validate every participant in the chain, all the way back to the farm.”

This article was originally published with the title "Is Your Food Contaminated?" in SA Special Editions 24, 2s, 58-63 (June 2015)

Mark Fischetti is a senior editor at Scientific American. 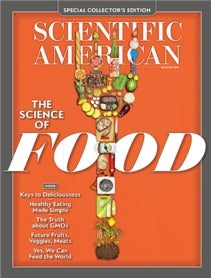