The frost still continuing, we give an illustration of a simple little electrical machine that can be made by any of our youngreaders, and which will operate well this cold weather. Take a board. A, and fasten to it four bottles of equal size, B, in the position shown. Into the corks of two of them place a wire ring so as to form a journal for a shaft on which is mounted a circle of gutta percha, C, which may be covered with lac varnish or not ; to another of the bottles (an end one) attach a bent wire, E, and connect this to the ground or table by a chain. To this bent wire tie a silk cover, D, made of nearly two semicircles of silk sewn together, and also tie the other side to another bent wire, F, from which also some little spikes must project. If, all these things being prepared, the handle is turned so as to rotate the disk in the direction ofthe arrow and the knuckle be held about an inch or less from F, a series of blue sparks will pass from F to your knuckle, each accompanied by a sharp crcking noise. What is this spark? and from whence does it come ? are questions often asked and just as of ten left unsolved, for to tell the truth, much as we have applied electricity to the uses of the arts, and well as we understand its laws, yet the fact is we know nothing of the thing itself, beyond that it is a force and can be made manifest by friction and other means. Thelittle machine we have described is a frictional machine, about the operation of which we know just this : that the friction generated between the disk and the silk causes the electricity which wasassiMto become active, audit is attracted by the prime conductor, F, from which it flies to the nearest conductor, our finger, at the same moment more passive electricity passes from the earth through the chain, (although were there no chain, it would be attracted from the atmosphere,) and becomes by friction converted into active, and so the process is continuous, and the marvel is that this active and passive electricity are exactly the same. A pair of woolen rubbers, one on each side, maybe substituted for the wires, E, which will improve the action of maclrine. All that is known concerning the nature of this force will be found in an article on page 29th ofthe present volume of the SCIENTIFIC AMEKICAN.

This article was originally published with the title "Science in Sport" in Scientific American 13, 25, 200 (February 1858) 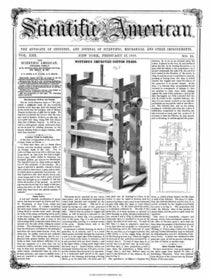