Normally science follows an orderly path: new observations build on previous findings, often in incremental steps over many years, contributing piecemeal to a larger body of knowledge. Every now and then, insights arise that don’t quite jibe with the observations that came before. Such aberrations yield a more nuanced understanding of the topic and are folded into the narrative of what we know. Sometimes, though, a new discovery is so profound that it is impossible to reconcile, and knowledge must proceed in a different direction entirely. This is a collection of articles about those kinds of advances—what Thomas S. Kuhn called “paradigm shifts” in his 1962 book The Structure of Scientific Revolutions.

Take, for instance, the origin of life. For more than 40 years the hypothesis has been that the most basic fragments of life assembled into more complex organisms while floating in the primordial oceans. Yet recent evidence suggests that nascence may have instead happened in the toxic pools of an active volcanic landscape. Or consider the dinosaurs, a legion of what researchers once believed were impressive but drab-looking creatures that dominated the earth for nearly 150 million years. In fact, they weren't drab at all—research on fossilized melanin cells now shows that dinosaurs were feathered in bright colors; some even sported dots and stripes.

Revolutionary discoveries, though uncommon, have happened in nearly every field. In health, exercise, contrary to the received wisdom, does not control body weight. In brain science, researchers are abandoning Noam Chomsky’s long-standing theory that children’s minds are hardwired for language development. In cosmology, the latest studies show that our solar system may not have formed by neat and tidy accretion but rather through violent collisions. In biology, a naturalist helped to overturn a 150-year-old understanding of lichens, shedding fresh light on how symbioses work and how life-forms are defined. Some of these paradigm shifts are by no means complete, but they have all forced scientists to question assumptions and adopt new perspectives.

One of my graduate school advisers used to say that what humans Know (capital “K”) is infinitesimal compared with what is knowable in the universe. In that spirit, we also present a small sample of some of the most fascinating unanswered questions, from the befuddling mystery of what actually is dark matter to whether quantum computing might leave traditional computers in the dust (page 108).

The beauty of inquiry is that when we upend decades—or longer—of thinking, we uncover an entirely new set of questions to ask. The work of science is never done.

This article was originally published with the title "Science, Upended" in SA Special Editions 27, 3s, 1 (July 2018) 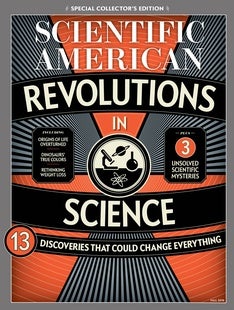