The scourge of small-pox has, it is well known, visited the city of San Francisco during the past season with frightful severity. Fears have been expressed that it would, in spite of the precautions taken to prevent its spread, visit the large I towns in the Atlantic States. In view of these facts we copy from the Pacific Medical and Surgical Journal, facts upon which the public should be posted at all times, and which are I of special value upon a threatened invasion of this horible disease. " Small-pox does not tend to spread extensively in a city or district, unless quickened by an epidemic influence. It may exist in a city constantly, from year to year, a few cases at a time, without displaying an active contagion. " During an epidemic aggravation recent vaccination is the only safeguard. Persons who have had small-pox, or who have been exposed to it in former years with impunity, as nurses and the like, are not secure from attack. " The duration of an epidemic is from six months to a year. The disease seldom progresses steadily, but fluctuates without relation to the sensible changes of climate. Win ter is the season most favorable to its pieva. lence. " During an epidemic of small-pox, other diseases are more-frequent and more fatal. " Foul emanations from sewers and so forth have little to do with it. They affect the general health, but do not promote in a marked degree the spread or duration of the epidemic. " When the disease is not epidemic, the morbific germs cm-mating from a patient soon lose their vitality. But when an 3pidemic influence prevails, these germs resist decay and inject the entire atmosphere. They do not cause sickness un~ ess the condition of the individual be favorable to their development. In an infected city, many persons perhaps, nost of the inhabitants receive them in the blood without njury. " Disinfectants, such as chlorine, carbolic acid, the fumes of sulphur, etc., will not destroy the germs of small-pox, unless licy are strong enough to destroy human life. Sunlight, air, md heat arc the best disinfectants. Clothing is perfectly Lisinfected by baking in an oven, or exposure for a short time o a heat at or above that of boiling water. " The period of most active contagion is after the appearance f the eruption and during the process of scabbing. It is [iiestioned by some good authorities whether the disease is, ontagious at all prior to the formation of pustules. " Vaccination will not take perfectly a second time in more ban one or two out of every one hundred persons. " It will take partially, with some resemblance to the genu-0.0 cow-pox, in twenty-five per cent of the cases, Heje. the resumption is that re-vaccination was useful. " A large scar is no evidence of genuine vaccination, nor is a irgc and painful sore. A spurious pustule is apt to be worse, hau the genuine vaccina. "When re-vaccination is not followed by itching, or any other Sect, it should be repeated. The virus may not have beeil ctive. " No other matter should be employed than the lymph or rust from the first vaccination of a healthy child ; or that iken from the cow. There is less uncertainty in the former ban the latter. " The crust should never be kept long after mixing it with rater. It develops a virulent poison. " Evacuation of the pustules is advised not only to prevent itting, but as possibly serviceable in lessening danger from 3condary fever, and as a case in point it is stated thus : An ntirely unexpected recovery of a very bad case, was effected y the patient opening of the pustules and wiping away of lo matter by the wife of the patient, rapid improvement t tig place at the time when the dreaded secondary fever should ave set in." Ihbia Rubber Liquid Blacking. Take of ivory black, xty pounds ; molasses, forty-five pounds; gum-arabic dis-)ived in a sufficient quantity of hot water, one pound ; vine-ar, twenty gallons ; sulphuric acid, twenty-four pounds ; In-La rubber, dissolved by the aid of heat in nine pounds of rape ;ed oil, eighteen ounces; mix them well together. This Lacking may be applied by means of a small sponge, at-Lched to a piece f twisted wire, like the well-known Japan blacking.

This article was originally published with the title "Small-Pox and Vaccination" in Scientific American 20, 15, 232 (April 1869) 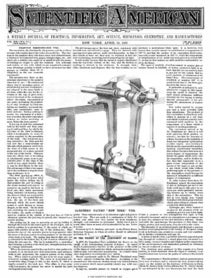