The extract from the BwBetire of the National Association of Wool Manufacturers upon this subject, published recently in the Scientific American, has attracted much attention and.excited some alarm in the minds of many using such apparatus. Some of these have made examinations into the condition of the wood work in the viciuity of such pipes and report » all right.» Some have kindly sent us specimens of the wood, showing its condition after exposure for a considerable time to the action of the heat from steam pipes. Should the article in question lead to a general examination, and should our correspondents be communicative, it is probable much useful information would be elicited. Among those who have favored us with specimens are Dr. Daniel Ayres, of Brooklyn, N. Y. The chips presented by this gentleman were taken from wood in contact with pipes of the low-steam warming and ventilating apparatus, made by D. R. Benton of the same city. The wood appears somewhat like that which has undergone what is known as dry rot, but shows no signs of combustion. It is remarkably dry, light, and brittle, may be much of it crumbled to pieces by the fingers, and is evidently in a condition to be ignited at a comparatively low temperature. These chips are of spruce timber, with seme apparently of pine, which are the most brittle. We are decidedly of the opinion that these chips would not ignite at any temperature to which they have been exposed during several years in the building from which they were taken, but we should decidedly fear their ignition in contact with pipes filled with high steam. Some experiments to test the temperature at which wood in this condition would ignite would be of great practical value in settling the question of safety in using steam pipes for heating purposes, and we trust such experiments will be performed by some competent person, and their results made public. A. II. Walker, of Oswego, N. Y., sends us a specimen of excellent tinder into which some new sack cloth placed in contact with pipes carrying steam at sixty pounds, six months since, has been converted. It is strongly suggestive of fire in its appearance, and catches and continues to burn from the slightest spark. We would like to see this subject thoroughly ventilated and some definite and reliable conclusion reached in regard to it. The question is one of the utmost importance, and all its bearings should be thoroughly understood. which one vessel 280 feet long and another vessel 260 feet long are projectedentire machinery, boilers, engines, and armament to be constructed at the arsenal. A college is in formation, and literary men, appointed by the government, are at present employed whh foreigners, translating works on mathematics» engineering, chemistry, etc., in order to prepare class books in the Chinese language for the use of the arsenal, to b read throughout the middle kingdom, to educate the Chinese in all that relates to an arsenal, ship building, etc. Engineering students are to learn mechanics in the college, and the practical parts in the shops. Navigating students are to have a large training ship, so that they may learn seamanship practically and theoretically.

This article was originally published with the title "Steam Pipes as Causes of Fire" in Scientific American 21, 15, 233 (October 1869) 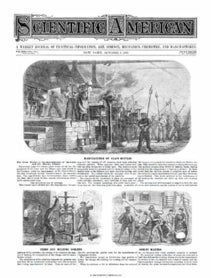