THINGS GET WEIRD—spectacularly so—at the borderlands of physics. The rarefied realms described mathematically and sometimes glimpsed in experiments are all the more extraordinary for not being the mere products of someone's hyperactive imagination.

For instance, string theory's equations imply that the universe contains six extra dimensions, which are too tiny to have yet been detected. Some physicists also see innumerable theoretical universes in their equations. In their article “The String Theory Landscape,” starting on page 40, Raphael Bousso and Joseph Polchinski provide a view of a theoretical terrain populated with an array of such possible worlds.

We perceive space and time as being continuous, but quantum principles imply that, in fact, at the very smallest scales they actually come in pieces. The effects of this discrete structure could be revealed in experiments in the near future. For a closer look at these ideas and the theory of loop quantum gravity, turn to page 56 for Lee Smolin's “Atoms of Space and Time.”

The holographic principle—as Jacob D. Bekenstein explains in “Information in the Holographic Universe,” starting on page 74—states that the universe is like a hologram. Just as a trick of light allows a fully three-dimensional image to be recorded on a flat piece of film, our seemingly 3-D universe could be completely equivalent to alternative quantum fields and physical laws “painted” on a distant, vast surface. Our innate perception that the world is three-dimensional could be an extraordinary illusion.

Intellectual enrichment aside, it might be tempting to think that none of what scientists are learning by probing the frontiers of physics truly matters in our everyday lives. Not so. As just one example, consider general relativity, which explains how gravity results from bends in the fabric of spacetime itself. To be accurate, commonplace GPS receivers—which calculate location using a constellation of orbiting satellites—must take the effects of general relativity into account.

In the pages of this special edition, we invite you to take an armchair journey through our curious universe, with our scientist authors as tour guides. You’re in for a mind-boggling treat.

This article was originally published with the title "Strange Places" in SA Special Editions 15, 3s, 1 (January 2006)

Our Sun Could Someday Reveal the Surfaces of Alien Earths

The Field of Firearms Forensics Is Flawed

What We Know about the Rise in Monkeypox Cases Worldwide

Science Must Not Be Used to Foster White Supremacy 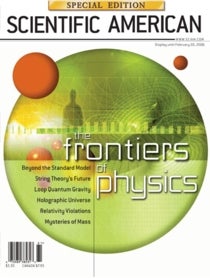 In the store
SA Special Editions
The Frontiers of Physics
$9.99