Too much is said against tea by wise people, and too much of tea is given to the sick by foolish people. When you see the natural and almost universal craving in English sick for their" tea," you cannot but feel that nature knows what she is about. But a little tea or coffee restores them quite as much as a great deal; and a great deal of tea, and especially of coffee, impairs the little power of digestion they have.

Yet the nurse, because she sees how one or two cups of tea or coffee restores her patient, thinks that three or four will do twice as much. This is not the case at all; it is, however, certain that their is nothing yet discovered which is a substitute to the English patient for his cup of tea; he can take it when he can take nothing else, and he often cannot take anything else if he has it not. I should be very glad if any of the abusers of tea would point out what to give to an English patient after a sleepless night instead of tea. If you gIve it at five or six o'clock in the morning, he may even sometimes fall asleep after it, and get, perhaps, his only two or three hours' sleep during the twenty-four. At the same time you never should give tea or coffee to the sick, as a rule after five o'olock in the afternoon.

Sleeplessness in the early part of the night is from excitement, generally, and is increased by tea or coffee; sleeplessness which continues to the early morning is from exhaustion often, and is relieved by tea. The only English patients I have ever known refuse tea, have been typhus cases; and the first sign of their getting better was their craving again for tea. In general the dry and dirty tongue always prefers tea to coffee, and will quite decline milk unless with tea. Coffee is a better restorative than tea, but a greater impairer of the digestion. Let the patient's taste decide. You will say that in cases of great thirst, the patient's craving decides that it will drink a great deal of tea, and that you cannot help it. But in these cases be sure that the patient requires diluents for quite other purposes than quenching the thirst; he wants a great deal of some drink, not only of tea, and the doctor will order that he is to have barley-water, or lemonade, or soda-water and milk, as the case may be.

Lehmann, quoted by Dr. Christison, says, that among the well and active" the infusion of an ounce of roasted coffee daily will diminish the waste going on in the body by one.fourth;" and Dr. Christison adds that tea has the same property. Now, this is actual experiment. Lehmann weighs the man and finds the fact from his weight. It is not deducted from any" analysis " of food. All experience among the sick shows the same thing. Cocoa is often recommended to the sick in lieu of tea or coffee. But independently of the fact that English sick very generally dislike cocoa, it has quite a different effect from tea or coffee. It is an oily, starchy nut, having no restorative power at all, but simply increasing fat. It is pure mockery of the sick, therefore, to call it a substitute for tea. For any renovating stimulus it has, you might just as well offer them chestnuts instead of tea.

An almost universal error among nurses is the bulk of food, and especially the drinks they offer to their patients. Suppose a patient ordered four ounces of brandy during the day, how is he to take this if you make it into four pints with diluting it? The same with tea and beaf-tea, with arrowroot, milk, &c. You have not increased the nourishment, you have not increased the renovating power of these articles, by in (creasing their bulk; you have very likely diminished both by giving the patient's digestion more to do; and most likely of all, the patient will leave half of what he has been ordered to take, because he could not swallow the milk with which you have been pleased to invest it. It requires very nice observation and care (and meets with hardly any) to determine what will not be too thick or too strong for the patient to take, while giving him no more than the bulk which he is able to awallow.

This article was originally published with the title "Tea, Coffee, and Cocoa for the Sick" in Scientific American 3, 1, 3 (July 1860)

What the Disease Feels Like, and Presidents Can't End Pandemics | COVID, Quickly, Episode 39 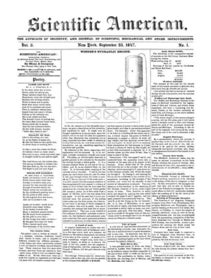