Toby lies in his crib watching his mother, Claudia, as she does housework. He babbles happily and kicks his legs with delight as one piece of clothing after another disappears into the washing machine. "I wonder if he realizes that I am intentionally picking up this T-shirt to put it into the machine?" Claudia asks. "And does he consciously control his movements?"

Parents aren't the only ones who wonder. Researchers have been asking similar questions in studies during the past two decades. In recent years, they have gained some surprising insights into the cognitive development of infants. As it turns out, even the smallest babies know far more than we have traditionally given them credit for.

For centuries, infants were viewed as virtually passive beings who absorbed little information from their environment and whose movements were almost exclusively reflexive. The situation is very different today: scientists know that a human being learns at an astonishing rate during the first few months after birth, perhaps faster than at any other time in his or her life. Babies explore the world with all senses, and their brains process an abundance of experiences and stimuli. Psychologists are probing exactly when the seeds of reasoning begin to sprout.

Little Test Subjects
How does one study the capabilities of children who cannot yet talk? Psychologists turn to an array of testing techniques based on the systematic observation of baby behavior. First, the procedures take advantage of an infant's natural attentiveness to new objects or situations. The more surprising the situation, the longer the infant focuses. Babies also find dolls, plush animals, unusual sounds and light effects appealing. Second, infants are very imitative, providing another way to delve into their development. Tests do, nonetheless, have to take a youngster's physical progress into account. For instance, tasks that involve grasping and shaking an object are not suitable for a child younger than about six months.

One of the major questions about babies' capabilities that researchers have explored is, Do babies learn from watching the actions of others? For example, suppose a child watches an adult manipulating a puppet that is wearing a glove. The adult removes the puppet's glove and shakes it three times, causing a bell to ring, and then puts the glove back on. After demonstrating this sequence several times, the adult gives the puppet to the baby. While the baby plays with the puppet, researchers analyze their little subject. Surprisingly, children as young as six months make use of their previous observation. They repeat the first step of the action sequence they have observed--taking off the glove--far more often than do members of a control group, who did not see the sequence. Over a 24-hour period, they continue to remember the action, as long as the opportunity to play with the puppet is repeated often enough. Children are not able to master all three steps, however, until they are about 15 to 18 months old.

Another research question is, Do infants merely copy the movements of others, or can they imagine an effect that they then set out to produce? "Conditioning" experiments, popular in the 1960s, established that even newborns can learn to elicit pleasurable effects by making particular movements--that is to say, they can be conditioned at a very early age. They move about and take in and process interesting phenomena in their surroundings almost as soon as they are born. From their experiences they then discover contingency, the relation between their own movements and events that occur in the environment around them. In experiments with nursing newborns, they can learn to suckle at a certain frequency to elicit through a headset the soothing voice of their own mother but not that of another woman. Another way we have studied infants' familiarity with contingency in the lab is with mobiles. The baby lies in a crib, with a string fastened to her ankle and to a mobile. Whenever she kicks, she sees the mobile move. Within a few minutes she discovers this contingency, and she kicks more frequently.

Experiments based on imitation, rather than on conditioning, also can be revealing. In 2002 my research group at the Max Planck Institute for Human Cognitive and Brain Sciences in Munich conducted a study in which 72 12- and 18-month-olds watched a man perform a three-part series of actions. The adult picked up a cylindrical wooden block that had been placed in front of a teddy bear, shook it and then returned it to its original position. For one group of children, shaking the block made an interesting buzzing sound; for another group, putting it back caused the sound.

After the demonstration, children played with the bear and the block. They imitated the action that caused the sound both more often and earlier than did children in a control group, where no demonstration had been made. From this study, we learned that at the age of one year (and perhaps earlier) children use the knowledge gained from observation to anticipate the effects of their actions.

In another experiment, we wanted to determine the age at which babies recognize that the effects they themselves initiate are not identical to the effects they have observed previously. This time, when a tester pulled on a red plastic ring, a clear tone sounded; pushing on the ring caused it to light up. Subsequently, before letting children play freely with the object, experimenters reversed the order: pulling led to the light, whereas pushing created the sound. Children from about the age of 15 months noticed this difference; only at that age did they perform the observed movement with the ring less often than did children in a control group, for whom the order was not reversed. This outcome means that only during year two do children begin to recognize the particular relation between someone else's action and its effect and those of their own.

Intentional or Inadvertent?
Further experiments suggest that babies only five or six months old can recognize the actions of others as intentional. Amanda L. Woodward, now at the University of Maryland, conducted just such a study in 1998. Infants watched a hand on a stage repeatedly grasp a particular object, such as a tower, but not a second object that had been placed right next to it, such as a cube. The positions of the tower and cube were then switched. In one variation of the test, the hand again reached for the tower but used a different motion to grab it because of the switched position. In a second version, the same motion was made, but the hand picked up the cube. The tots found this latter maneuver much more fascinating: they watched considerably longer when the target object of the action changed but the hand movement remained the same. This observation demonstrates that children between five and six months can interpret as intentional the grasping movements of others.

What if the actions are new and unfamiliar? Seeking an answer, our research group extended Woodward's experiment. We presented the babies with a hand, the back of which touched a tower and pushed it to a new position. We found that babies as young as six months can realize that this unfamiliar action is intentional--but only if the actions are accompanied by a clearly recognizable effect, such as a change in the tower's position. If this effect is omitted, babies treat the action as inadvertent. Another Woodward study, reported in 2005 in the journal Cognition, found that by the age of one year, babies can even recognize that separate actions made by another person are governed by an underlying plan.

Thus, the traditional perspective--that understanding the behaviors of others is predicated on one's own prior actions--has been called into question by the latest research conducted by developmental psychologists. It may be that these capacities develop in parallel. Even if Toby is as yet unable to carry out particular movements purposefully, he certainly can comprehend his mother's intentions. This aspect of baby development is similar to speech, where the ability to understand comes well before that of speaking.

The upshot for parents is: even during their first year of life, your children probably understand a good deal more about your actions than you realize.

(The Author)
Gisa Aschersleben is a professor of developmental psychology at Saarland University in Saarbruecken, Germany.

This article was originally published with the title "Test Subjects in Diapers" in SA Special Editions 17, 2s, 10-13 (June 2007) 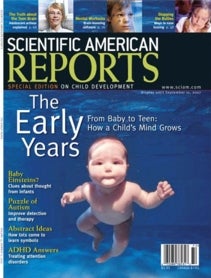