In June 1827, after a full day of travel, journalist Richard Madden arrived to Adjerond, Egypt, near Suez. He looked at the horizon across the vast desert and was struck by a vision that would stay with him long after his voyage. “At one moment, the rippled surface of a lake was before my eyes … the mosques and minarets were distinct, and several times I asked my Bedouins if that were not Suez before us; but they laughed at me and said it was all sand,” he later wrote.

A 2020 paper by science historian Fiona Amery of the University of Cambridge posits that mirages first became the object of popular captivation in Britain in the 1820s and 1830s, a period that exploded with vivid descriptions in novels, scientific journals and travel literature. It was also during this time that the public grew enthralled with the unreliability of sight, as demonstrated by magic-lantern shows and instruments such as the stereoscope or the zoetrope.

In contrast with perceptual experiences such as pareidolia and afterimages, mirages are proper optical illusions. This means that their fundamental explanation lies in optics: the science of the behavior and properties of light. Meanwhile many so-called optical illusions have little to do with the physics of light, but they take shape in the mind of the observer. Such illusions are more appropriately called visual (or in other senses, auditory, tactile, etcetera) or cognitive, depending on whether they arise from sensory or cognitive brain regions. One example of a visual (rather than an optical) illusion is our perception of movement in certain stationary images, which occurs when our visual brain circuits respond to local brightness changes in an image as they would do to actual motion.

As for mirages themselves, they result from the quantum-electrodynamics phenomenon that photons always take the path of minimum time. Thus, when air temperature is constant, light travels in a straight line. But in the presence of a steady temperature gradient, light follows a curved path from hotter to cooler air. In the specific case of a vertical temperature gradient, light curves from the sky to the observer’s eye. One familiar example of such a situation is seeing the sky reflected on the road ahead, which we may interpret as water on the ground. This kind of “mirage effect” reflection was central to the development of underwater cloaking technology in the past decade.

“Although I was aware of the existence of the Mirage, I could not prevail on myself to believe that the images .. . were only reflected,” wrote Madden, and so it remains today. As mesmerizing now as 200 years ago, mirages still puzzle our senses and remind us that there is much more to vision than meets the eye. 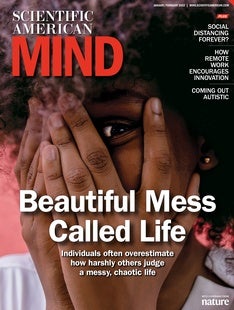