In the year since a Minneapolis police officer kneeled on George Floyd’s neck for more than nine minutes and stopped the man’s heart, a record number of protesters have taken to the streets around the world to demand change. Earlier this year a jury took the all too extraordinary step of convicting the officer of murder. But the incessant killing of Black people and “the devaluation of Black lives in all domains of American life,” as sociologist Aldon Morris writes, continue to power the Black Lives Matter movement, which was launched in 2013 after the acquittal of Trayvon Martin’s killer in Florida.

It is an unequivocal scientific fact that race is a social construct, not a biological one. The implicit prejudices and biases we carry against those unlike us are real, but society instills them in our subconscious mind, and they are therefore malleable.

Discrimination oppresses and disenfranchises people everywhere. Misattributing blame for racist systems and practices to its victims constitutes a kind of institutional-level gaslighting that enforces white supremacy. In everyday interactions, those with privilege and power subtly insult those in the “out-group” through microaggressions that reinforce their power structure and inflict psychological harm. Even the way people talk about certain scientific fields keeps women and minority groups excluded from academia and related professions. And despite institutional efforts to increase diversity and inclusion, science is plagued by discrimination and loss of minority talent.

Public health expert Camara Phyllis Jones explains why such institutional racism, not race, has made people of color more than twice as likely to die from COVID-19. And irrespective of the global pandemic, Black children and other minorities are disproportionately born into poverty and thus incur more health risks throughout their lives. Black mothers suffer higher rates of maternal mortality, and doctors and algorithms often overlook or discount medical symptoms experienced by Black people.

In the wake of Floyd’s murder, civil rights expert Alexis J. Hoag recounted to Scientific American the violent, racist history that brought U.S. society to a breaking point—one where Black people are about three times more likely than white people to be killed by law enforcement. In September 2020 the editors of Scientific American called for sweeping reforms of U.S. law enforcement, from demilitarizing police forces to hiring more social workers and mental health professionals to respond to nonviolent incidents.

People of color are more likely to suffer the consequences of a degraded and plundered environment as well: Those with power benefit from exploiting the natural world, but it’s the poorest among us who bear the impacts, including toxic pollution. Asian, Hispanic and Black people experience the highest rates of asthma in the nation, which are strongly linked to dirty inner-city air.

In her influential book Why Are All the Black Kids Sitting Together in the Cafeteria?, psychologist Beverly Daniel Tatum analogized racism this way: as a moving walkway at the airport that will carry you along unless you walk, vigorously, in the other direction. As Morris writes, lasting change will depend on how well each of us can disrupt the regimes of racial inequality. We must all turn around and conscientiously walk toward a more just world.

This article was originally published with the title "The Case for Antiracism" in SA Special Editions 30, 3s, 1 (July 2021) 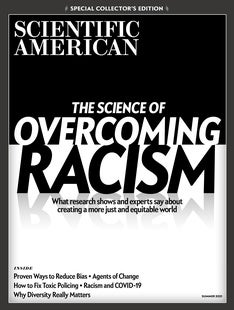