Situated on a barren and lonely headland of the coast of Galway, three miles from the town of Clifden, is the Irish station of the Marconi transatlantic wireless telegraph system. No less barren are the surround ings of the American station at Glace Bay, Nova Scotia. But in choosing a site for a station which is to vio lently set in motion the ether over a radius of 2,500 miles, no consideration can be had for the comforts or convenience of the surroundings. As a matter of fact, it is a decided advantage to place the station as far from town as possible, because buildings, trees, telegraph and telephone poles and wires, all tend to absorb a large part of the power radiated from the antenna. Clifden station's only communication with the outside world, other than that afforded by wire less telegraphy is carried on over an odd little narrow-gage railroad, which runs across the bog lands to the nearest roadway. The site of the station consists of about 300 acres of bog land, on which have been erected the engineers' quarters, a power station, a large condenser house, and an elaborate antenna system. The arrangement of the antenna is very interesting. It is of the directional type recently invented by Signor Marconi. One of our illustrations shows the condenser building, with the antenna network to the rear. It will be seen that this comprises a number of tall masts, eight in number, which reach a height of 200 feet. Supported by these masts are fifty-two wires, which cover a horizontal rectangle about 200 feet wide and nearly 1,000 feet in length. At the forward end of this rectangle the wires are brought together in the form of a fan and carried down to a single cable, which enters the rear of the condenser house, as shown in another of the illustra tions. It will be noted that the horizontal wires lead away from the vertical fan of wires inland, and not in the direction in which it is desired to send the mes sages. This has been found by experiment to cause the greatest radiation of Hertzian waves to take place in the opposite direction to that in which the hori zontal wires run. A very interesting photograph of the antenna net work was taken at night, and this we reproduce here with. It will be observed that certain of the wires are luminous, showing that there is a brush discharge from them, which affects the photographic plate. This discharge is invisible to the naked eye; but being largely composed of ultra-violet light, its presence is recorded by the camera. A person standing under the grid of wires while a message is being sent will hear a loud cracking noise, somewhat like that pro duced at the spark gap. Aside from the luminous wires, a number of parallel streaks of light are shown in the photograph. These, however, have nothing to do with wireless telegraphy, but are merely star tracks recorded on the plate during the half hour of exposure. It is quite a curious and interesting fact that only the outer wires of the antenna network are luminous, while at the end of the network the terminus of each of the fifty-two wires shows as a faint streak of light. This shows very clearly that the entire network acts as a single continuous sheet of metal; that the inductive effect of the wires within the rectangle serve to coun teract each other and crowd the oscillating charge to the edges of the rectangle, just as would be the case if a solid plate were used; for it is well known that high-tension alternating currents seek the outer sur face of an object or the edges of a plate. The photo graph would then seem to indicate that the wires of the antenna are too closely arranged, and that a better effect would be produced by using fewer wires arranged at greater distances apart. In Cornwall experience shows that woven-wire screens in the stamps which crush tin ores are better than punched plates.

This article was originally published with the title "The Clifden Station of the Marconi Wireless Telegraph System" in Scientific American 97, 21, 377 (November 1907) 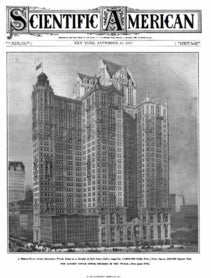