Through the courtesy of Capt. Mario Ricaldoni we Are enabled to present the accompanying illustrations of the Crocco-Ricaldoni hydroplane. Built in the yard of M. Baglietto, at Varazze, on the Gulf of Genoa, the craft has been run on the Lake of Bracci-ano, near Rome. The length of the boat is 8 meters (26 feet 3 inches). She is fitted with a Clement-Bayard 80 to 100 horse-power motor, having cylinders 180 millimeters by 180 millimeters (7.09 inches by 7.09 inches), and working at a speed of 1,200 revolutions per minute. The boat is provided with hydroplanes only at the bow and stern. The planes at the bow are arranged in the manner of a V, while those aft, though similarly disposed, do not jOin at the inverted apex. These planes, and the principal members of the frames supporting them, are made of steel plating, the remaining parts of the carrier frames being of aluminium. One of our views shows an end-on view of the vessel and depicts the low V-shaped plane. The aerial propellers are of doubled aluminium plating, and weigh each about 12 kilogrammes (26.4 pounds). Their pitch can be altered while running, and they can be reversed. The propellers are mounted on frames of aluminium sheeting, which, together with the shafts, gear, transmission, and controlling devices, etc., weigh 300 kilogrammes (660 pounds). The weight of the motor is also 300 kilogrammes (660 pounds). Including all machinery, fuel, etc., and two men on board, the vessel weighs 1,500 kilogrammes (3,300 pounds). When running, the boat rises, so that the hull is clear of the water, and at the speed of 70 kilometers per hour (43.5 miles per hour) which has been obtained with this novel form of vessel, the hull is about 18 inches out of the water. The view of the boat under way shows her at full speed, supported solely by the V-shaped planes, the hull being clear of the water as described. We are informed by the inventors of this boat that on commencing a run, when a speed of about 10 kilometers (6.2 miles) per hour is attained, the bows begin to lift in the water, and the fore fins slowly emerge as the speed increases. At a speed of 25 kilometers (15.5 miles) per hour the hull is wholly out of the water, only the flat portion near the stern skimming on the surface. At from 30 to 35 kilometers (18.6 to 21.7 miles) the boat is supported solely by the V-shaped planes; and at the highest speeds yet attained the hull is, as we have already stated, 18 inches out of the water. It has been found that waves of a height of 20 centimeters (7.87 inches) do not affect the vessel, as at the high speeds the hull stands quite clear of the tops of waves of this size. Trials of a length of 6 kilometers (3.73 miles) have been run, and sharp turns have been taken while running. After a certain amount of further experimental work, the inventors propose to put the boat through still more exhaustive trials, under as varied condition s as possible. m m The Pope's Private Rallway Car. For many years there stood in the yard of the Florentine railways a saloon car, which bore the name of "The Papal Car." It was originally built and furnished to be used by the Pope on his journeysat a time when His Holiness did not choose to remain a voluntary prisoner in the Vatican; and it is not impossible that Pius IX. may have used it before 1870, on some of his not very numerous nor very extensive journeys. Like the papal horse-drawn carriages, it is distinguished from the generally very lightly-built Italian railway carriages by its extreme size and weight. It was done up in sky blue, with the figure of an angel at each corner; and was both ri?hly and gorgeously fitted up. Provision was made for all needs and comforts of the Pope; there was even a private altar, in case His Holiness should want to read Mass when under way. This car has d i s a p -peared as thoroughly as mysteriously; and no one knowsor will saywhere it is. At the Milan Exhibition of 1906 there was a retrospective exhibit of transportation of the nineteenth century, and it was intended to show the papal car; but during the negotiations to this effect the Italian private railways passed into the possession of the State, which latter refused permission to have the caT exhibited. Since that time the Italian government and the Florentine general railway direction have discussed the renovation of the papal car. Sketches, plans, and other designs have been prepared, and the railway has already had samples or upholstering materials sent to it, for approval, in order to put "the holy car," as it was officially known, in proper condition for Papal use. What the purpose of this renovation is, no one knows except some of fhe higher Papal and governmental authorities; but it might reasonably be assumed that there is a possibility that the present Pope intends to emerge from his present self-imposed imprisonment and revisit his beloved Venice. mi- The scheme for cutting a canal between New York and Boston is stated soon to be taken in hand.

This article was originally published with the title "The Crocco and Ricaldoni Hydroplane Boat" in Scientific American 97, 18, 304 (November 1907) 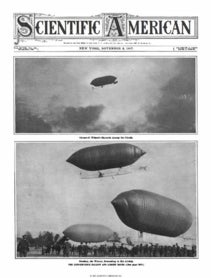