In our last issue we briefly announced the decision of the Supreme Court of the United States, between the rival Tliventors and manufacturers of reaping machines, Cyrus H. Mc-Cormick and John H. Manny, which was delivered by Justice Grier, as our paper was going to press. As then promised, we now lay before our readers the following abstract of the decision, embracing everything it contains of general interest:— "McCormick charged an infringement of the fourth and fifth claims of his patent of 1845, and of the second claim of his patent of 1847, re-issued in 1853. I. The first infringement charged is that of the divider—a part of the reaping machine which is of a wedge form, and projects in advance of the sickle, to separate the grain to be cut in the swath from that which is to be left standing until the next swath is cut. McCormick's claim to the divider, as set forth in his patent, is : * Fourth, I claim the combination of the bow, L, and the dividing iron, M, for separating the wheat in the way described.' For the purposes of this case, the divider, although a component part of the complex machine called * the reaper,' may be considered by itself as a machine, or combination of devices, attached to the reaper to perform certain functions necessary to complete the whole operation. In order to ascertain whether the divider used by the defendants infringes that of the complainant, we must first inquire whether McCormick was the first to invent the machine called a divider, toper-form the functions required, or has merely improved a known machine by some peculiar combination of mechanical devices which perform the same functions in a better manner. But if the invention claimed is only an improvement on a known machine by a new change of form or combination of parts, (and the evidence in this case shows it is nothing more,) the patentee cannot treat another as as infringer who has improved the original machine by the use of a different form or combination performing the same functions. The inventor of the first improvement cannot invoke the doctrine of equivalents to suppress all other improvements which are not mere colorable evasions of the first. McCormick's claim is for the combination of the outside bow with an inside dividing iron of a certain form. This dividing iron is" but a new form or substitution of that side of the wedge or divider, which in other machines performed the function of separating the inside grain, and raising it to the cutters and reel. The machine constructed under Manny's patent has a wooden divider, somewhat in the form of a wedge, but it has no dividing iron, nor substitute or equivalent device possessing the peculiar qualities of that instrument. It more resembles the wedge in use before McCormick's patent of 1845, and is certainly no infringement of his claim. II. The second infringement charged is that of the reel post, a standard on the end of the platform for supporting the axle of the reel immediately over the divider. McCormick's claim to the reel post, as set forth in his patent, is : * Fifth, I claim setting the lower end of the reel post, R, behind the blade, curving it at R2, and leaning it forward at top, thereby favoring the cutting, and enabling me to brace it at top by the front brace, S, as described, which I claim in combination with the post.' Manny does not support his reel by a post, or use a brace ; he uses a horizontal arm pico-jecting forward from the back part of 1:he frame. This device was used many years Ibe-fore McCormick's first patent of 1834. It is said to be superior to McCormick's braced post, and cannot be an mfnngement of McCormick's claim. III. The third infringement charged is that of the raker's seat, which is claimed in McCormick's patent as follows : * Second, And I also claim the combination of the reel for gathering the grain to the cutting apparatus and depositing it on the platform, with the seat or position for the raker, arranged and located as described, or the equivalent thereof, to enable the raker to rake the grain from the platform and deliver and lay it on the ground at the side of the machine, as described.' By this device McCormick obtained a place for the raker over the finger bar just back of the driving wheel, and at the end of the reel, where he could have free access to the grain, and rake it off the machine at right angles to the swath. It was by limiting his claim to this arrangement, location, and combination that the complainant obtained his patent; and without this construction of it, the claim is neither patentable nor original. The arrangement, combination and location of the raker's seat used by defendants has been patented to Manny as an independent contrivance and distinct invention. The place for the raker is obtained by a change in the shape of the platform, different from any before employed. It differs from the complainant's device in principle as well as in form and combination, and is, consequently, no infringement of his patent." [Thus has terminated a suit which, if McCormick had been successful, would have subjected the "Reaping Machine" to his own private monopoly, and made him lord of the harvest. It is a matter of great individual hardship to Manny & Co. that they should have been compelled, in order to shield themselves from a grasping monopoly, to maintain, single-handed, a defence—expensive beyond example—in the most important patent suit, perhaps, ever tried in this country, while the benefits of their success will ensue chiefly to other manufacturers, whom the suit has not cost a single dollar.—Eds.

This article was originally published with the title "The Decision in the Reaper Patent Case" in Scientific American 13, 35, 278 (May 1858) 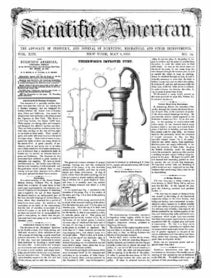