About two weeks ago one of our city papers, stated that a beautiful Ericsson engine was to be on Exhibition, and spoke of it in the most flattering terms, as something which would astonish the public and more than prove all the high flown panegyrics paid to it previously by the same paper. On Thursday last week, the same paper published a communication stating that the application for space in the Crystal Palace tor the said engine had been withdrawn. This is true, as we have learnedby special inquiry at the office of the Crystal Palace Association. The Superintendent of Machinery, Joseph E. Holmes, Esq., a practical engineer, designed to test the power of the Hot Air Engine by a dynome-ter, and to weigh the amount of coal to propel it. We could not learn what the reasons were which induced the builders of the Ericsson engine to withdraw the application,— we present the fact and can draw an inference —so can every person who reads this.

This article was originally published with the title "The Ericsson not at the Crystal Palace" in Scientific American 8, 49, 388 (August 1853) 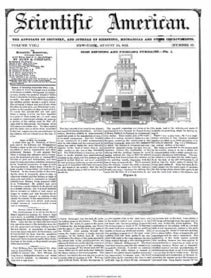