Near Lake Eyasi in Tanzania is a series of layers of volcanic ash notable for having yielded the remains of early hominids that are among the oldest known: they date back between 3.5 and 3.8 million years. The layers of ash hold an even more unusual example of preservation: fossil footprints. Several tens of thousands of animal tracks have now been discovered· in these ash deposits. The survival of these normally ephemeral traces, ranging from early hominid footprints to the trail of a passing insect, gives a vivid glimpse of life on the African savanna well before the Pleistocene epoch. How did they escape obliteration?

The extensive formation known to geologists as the Laetolil Beds is exposed over some 1,500 square kilometers on the Eyasi Plateau, an uplifted fault block northwest of Lake Eyasi. The beds overlie ancient basement rocks of Precambrian age and are themselves bordered and overlain to the east by several large volcanoes. The exposures richest in fossils are found in the smaller area called Laetoli, about 70 square kilometers in extent, that lies at an elevation of 1,700 to 1,800 meters on and near the drainage divide that runs between Lake Eyasi and Olduvai Gorge to the north.

Fossils are found mainly in the upper 45 to 60 meters of the beds, which at Laetoli are at least 130 meters thick. About three-fourths of the upper part of the formation consists of eolian tuffs: beds of volcanic ash that was redeposited by the wind after it had fallen. Most of the other ash beds, which alternate with the eolian tuffs, are "air fall" tuffs, that is, deposits of ash that remained essentially undisturbed after it had settled out of the eruptive cloud. Consisting largely of particles the size of fine sand grains (.125 to .25 millimeter) and medium-size sand grains (.25 to .5 millimeter), the eolian ash buried animal bones and teeth, bird eggs, land snails and other objects exposed on the ground. All the ash, eolian and air fall, came from one volcano: Sadiman, about 20 kilometers east of Laetoli.

In 1935 the area was explored by Louis Leakey, the geologist Peter Kent and one of us (Mary Leakey). The party found that the fossil animal remains at Laetoli were older than those discovered in the lowest level (Bed I) at Olduvai Gorge. In 1938-39 an expedition headed by Ludwig Kohl-Larsen of the University of Tiibingen collected a large number of fossils in the area, including a fragment of a hominid upper jaw. In 1974 one of us (Mary Leakey) found additional hominid remains in a better state of preservation. As a result systematic investigations of the area have continued from 1975 to the present. They have yielded numerous hominid fossils, chiefly lower jaws and teeth, and a wide variety of other animal remains.

In 1976 Andrew Hill of Harvard University first came on animal tracks in a bed of tuff that since then has been called the Footprint Tuff. The next year Peter Jones of the University of Oxford and Philip Leakey found rather poorly preserved footprints, probably of hominid origin, in the same bed, and in 1978 Paul I. Abell of the University of Rhode Island discovered an unmistakably hominid footprint in the tuff at another place. Clearing of the surface layer there revealed more hominid footprints in two long parallel trails.

This article was originally published with the title "The Fossil Footprints of Laetoli" in Scientific American 246, 2, 50-57 (February 1982) 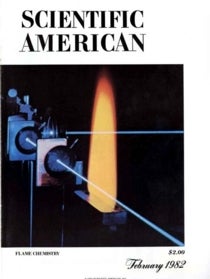