This week we give an engraving- of the interior of the new St. Paneras Station, Midland Railway, London. Occupying, as it does, a site of nearly ten acres, it is undoubtedly, if not from an architectural, at least from an engineering point of view, the finest terminus in the world. Its most interesting and peculiar feature is the roof. While it has the widest span of any roof in existence, the space beneath is unbroken by ties or braces, common to all others. Ii!@; style is subdued Gothic, with segments meeting at its crown. As shown in the engraving, the roof springs from the I'latfiJrlii level, the principal ribs each having the form of a four-centered arch, the radii of the curves being 57 feet and 160 feet, respectively. The two central curves—tnose of 160 feet radius—meet at an angle in 1.ie center at a hight of 96 feet above the platform level. The length of the roof is 600 feet with a dear span of 240 feet, covering five platforms, ten lines of rails, and a cab stand 35 feet wide, thus making a total area of 165,600 square feet. Its higlit at the ridge is 125 feet above the level of the road. There are twenty-five principal ribs in tie roof, each wci.ghing about 50 tuns. Between each of these, which are about 29 feet 4 inches apart from center to center, are three intermediate ribs, carried by trussed purlins, constructed so as to stiffen the bottom flanges of the main ribs laterally. The station walls rise behind the spring of the principal, the space at the top being filled in with open iron-work. The roof is glazed about 70 feet on each side of the center, and the remainder is covered with slates on boarding one inch and three eighths thick, grooved aUl'l tongued and chambered, the underside being varnished. The slates are best Welsh, and secure] y fastened to the boarding with copper nails weighing about 7 Ibs. per 1,000. The lap is not less than 3 inches. The timber work throughout is well protected by varnishing, painting, or Burnettizing, according to the situation in which it is fixed. The transverse girders which support the floor of the station take the thrust of the roof. They are connected so as to form continuous girders across the station. Besides being tied to them, the feet of the ribs are each secured by four 3-inch bolts to an anchor-plate built into the wall and strongly fastened. The rail level of the station is about 17t teet above that of the adjoining streets,thus affording very extensive cellarage. The hight of the basement story is 13 feet 6 inches, and under this basement the connection of the Midland line is carried to that of the Metropolitan system. To enable vehicles to reach the station levei from the strerjt, inclined approach roadways have been constructed on arches. Each side of the station is flanked by a row of picturesque shops and other buildings. The platforms have edges of dressed stone, and are floored with red deal planks, dressed, close-jointed, and tongued with hoop iron. The decorations include a tesselated frieze about two feet deep, inlaid with colored tiles,and a dado round the base to the foot of the principals. The molding above the frieze is surmounted by an iron cresting of floral design, the leaves to curve inward from the cornice. The lighting arrang-ements of the station are very eflective. They were intrusted to the Messrs. Sim and Barff, of Parliament street, London, and to their patent hydrocarbon process is to be attributed the brilliant light obtained, while a saving of sixty per cent is said to be effected. In the construction of the station about sixty millions of bricks, 80,000 cubic feet of dressed stone, and many thousand feet of glass and timber have been used. Over 9,000 tnns of ironwork have been employed, the weight of some of the principal portions of which are given as follows : Tuns. Main-floor girders...................... 500 Intermediate........................... 390 Cross-girders of floor.................... 1,020 Buckled plates.......................... 820 JUaiit roof, ribs, and spandrel framing . ... 1,270 Intermediate ribs....................... 820 Purlins and connetions between ribs. . . . 2BO Cast-iron columns and caps below flooring 1,080 The travelin'g stage and hoisting gear, by means of which the ribs and roofing were erected, were very ingeniously designed by J. G. N. Alleyne, of the Butterley Iron-works. The principle on which he acted was never to lose hold of the main rib until the wind ties were finally fixed to the walls. The staging was divided into three sections, the center consisting of six divisions, the side ones of five divisions each, ai)d from front to rear there were four divisions. The standards consisted of die-square backs of timber, 13 inches square ; the horizontal traverse pieces were double 12 inches by 6 inches each, except the lower one, which was 12 inches square, with iron shoes bolted down to receive the feet of the standards and braces. These were connected by cross braces, and the whole was moved, either together or separately, on 123 wheels, each 2 feet 8 inches in diameter, turning on a balk of timber 18 inches square. A large hotel is being constructed at the end of the station.

This article was originally published with the title "The Great St. Pancras Railway Station" in Scientific American 21, 24, 376 (December 1869) 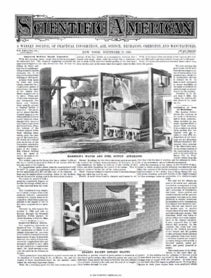