It may be one of the greatest scientific mysteries yet to be solved: What is consciousness? It’s an explanatory gap that still plagues neuroscientists—that is, what forges the relationship between the brain and the subjective sensations we call “feelings” or “awareness?” In a special report in this issue, we include several fresh takes on what gives humans, at the very least, consciousness. In one article, Peter Carruthers sits down with editor Steve Ayan to explain his hypothesis that consciousness is mostly an illusion (see “There Is No Such Thing as Conscious Thought”); the thoughts and feelings that arise in your mind are a result of unconscious mental processes operating behind the scenes. You feel you know your own mind, but it’s truly operating automatically. Dare I say the mind has a mind of its own?

Ayan further explores this idea in his article “The Brain’s Autopilot Mechanism Steers Consciousness.” Consciousness is only an impression of immediacy, he writes. We become aware of our consciousness when the brain’s background activities and predictions conflict with reality. Another fun idea that has come together in the past decade is that synchronized vibrations among living creatures are at the heart of human consciousness. Read more in Tam Hunt’s article “The Hippies Were Right! It’s All about Vibrations, Man!” As always, I hope you enjoy this issue, as much as your conscious mind allows. 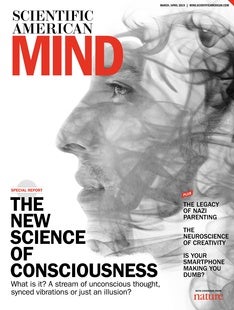