There is a considerable number of hydrocarbon oils (popularly spoken of as the light hydrocarbons on account of their low specific gravity) of mineral origin. That is, whatever their original source, upon which point there has been much speculation, they are now found collected in the earth, either free or mixed with other mineral substances. The increasing use of these oils aad the great number of their derivatives applicable to industrial purposes, renders them second in importance to very few known mineral products. The oldest known oil of this kind was, we believe, discovered in Persia, and it received and has retained for ages the i name of naphtha. This oil is a volatile, light-yellow, transparent liquid, with a strong odor, characteristic of most oils of its class. The art of distilling similar oils from coal tar, was developed later, and the same term was applied to tae light products of such distillation, the heavy products being called dead oil and asphaltum. Still later it was found that coal would, when distilJed, yield similar oils, and the term naphtha was applied to the light oils obtained from coal. The next step was the distillation of petroleum, and still the term naphtha was made to do duty for the light distillates. This term is then popularly applied indiscriminately to a large number of hydrocarbons, which yet have marked points of difference, the most general and prominent distinction being that based upon specific gravity. It is true that there are some distinctive terms applied to classes of these oils, but these are in some cases erroneous, and in others too indefinite. Benzine or benzole is one of these terms popularly applied to all hydrocarbon oils ranging in specific gravity from 45 to 80 degrees Baume. The term gasoline is strictly applied to oils ranging from 80 degrees Baume upwards to sometimes as high as 90 degrees. But we have often heard it improperly applied to those of a less specific gravity than 80 degrees. These oils as found in market are all complex mixtures of different oils. It has been asserted on good authority that each of them contain, in various proportions, at least twelve different hydrocarbons whose boiling points range from 32 Fah. to 318, eight of them boiling at lower temperatures than water. The naphthas are all highly inflammable, but they are not in themselves explosive. The lighter ones are, however, very volatile, and their vapors when mixed with air in the proper proportions to afford complete combustion, are highly explosive. They are also very difficult to keep in anything but hermetically sealed vessels of a material impervious both to the oils and their vapors. Nothing so porous as wood in its natural state will hold them, and for the most part they are put up in tight-sealed tin cans. Cans which have contained j these oils and which have had left in them a Small residue, are the most likely to contain an explosive mixture of air and hydrocarbon vapor. The light hydrocarbons may, however, be safely used for lighting purposes in apparatus specially designed to convert them into vapor, which vapor is passed through pipes and burners like ordinary illuminating gas. The latter is very explosive when mixed with common air in the proper propor- i tions, but it is undoubtedly the safest illuminating agent de vised up to the present time. The safety consists in the use of the proper appliances for its consumption. Whenever these light liydroearbon oils are used for consumption in lamps, there must, from the nature of the case, be great danger. There is the partially filled lamp, its open space filled with vapor, and communicating with the external air, and the flame in close proximity to the explosive mixture that must inevitably be sometimes formed. Although there may be many exemptions from disaster, there is always in such cases an immediate risk, and although the papers constantly give us accounts of serious casualties resulting from sach causes, their frequency does not surprise us so much, as that they are not far more frequent, taking into account the character of the oils so largely sold to a gullible public.

This article was originally published with the title "The Light Hydrocarbons" in Scientific American 21, 9, 138 (August 1869) 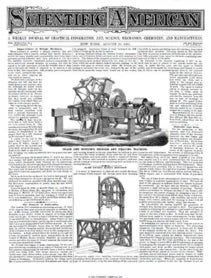