I must have been in about eighth grade when I first learned about one of the most recognizable cosmic formations that humans have ever observed. The Horsehead Nebula, a sculpted pillar of dust and gas that forms the far edge of the Orion B molecular cloud, is part of a massive stellar nursery where gravity, magnetic forces and radiation winds force matter together to birth new stars. That such a volatile, powerful place in the universe could also resemble the majestic beauty of a horse’s head had me hooked. Now some astronomers hypothesize that colossal black holes, too, may arise from so-called nurseries. As Charlie Wood details in this issue, a handful of candidates for this type of black hole formation have been discovered using LIGO observations, but much more data is needed (see “Black Hole Factories May Hide at Cores of Giant Galaxies”).

Elsewhere in these pages, Alexandra Witze details the ways that the appearance of two recent alien objects in our solar system are overturning long-held astronomical assumptions (see “Two Interstellar Intruders Are Upending Astronomy”). And XiaoZhi Lim reports on new “supercool materials” that can absorb heat and reradiate it directly through Earth’s atmosphere and into space (see “The Supercool Materials That Send Heat to Space”). As always, enjoy this issue!

This article was originally published with the title "The Majesty of Cosmic Chaos" in SA Space & Physics 3, 1, (February 2020)

Thousands of Coronavirus Tests Are Going Unused in U.S. Labs

If the World Fails to Protect the Economy, COVID-19 will Damage Health Long into the Future

Rising Temperatures May Push Ecosystems Past Their Limits

What's a Narwhal's Tusk For? 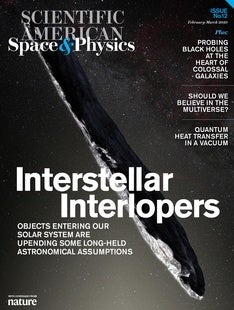