In early March, Scientific American put the finishing touches on a very exciting collector’s edition entitled “Quantum Universe,” due out on newsstands at the end of April (not so subtle sales pitch there). In assembling and editing the diverse articles for that issue, I came to notice a common theme in the field of quantum physics: the sense that our grasp, from an observational standpoint, of the quantum universe is tenuous and fleeting—the second you try to observe entanglement, the wave function collapses. Because of this phenomenon, researchers are desperate to devise new ways to gather quantum measurements. And so the discipline of ultracold quantum physics has proved a very satisfying direction of research. As Karmela Padavic-Callaghan writes in this issue’s cover story, investigators can manipulate superchilled atoms and use them as models for quantum systems (see “The Coolest Physics You’ve Ever Heard Of”). Having such control over a quantum experiment is gratifying.

Elsewhere in this issue, planetary scientist Carolyn Porco gives an account of corresponding with Carl Sagan about capturing an image of Earth from space (see “How the Celebrated ‘Pale Blue Dot’ Image Came to Be”), and Nola Taylor Redd reports on another compelling galactic image: two merging black holes that are sending whorls of dust and gas into view (see “Meet ‘Spikey,’ a Possible Pair of Merging Supermassive Black Holes”). Some things in the universe are very concrete indeed.

This article was originally published with the title "The Most Mercurial Field of All" in SA Space & Physics 3, 2, (April 2020)

Marching to the Beat of the 17-Year Cicada Clock

How Human Space Launches Have Diversified

Why Scientists Tweak Lab Viruses to Make Them More Contagious 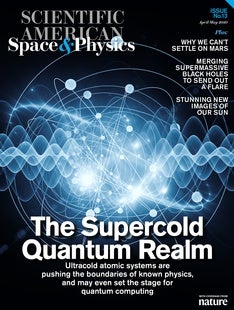