In 1994 Stephen W. Hawking and Roger Penrose gave a series of public lectures on general relativity at the Isaac Newton Institute for Mathematical Sciences at the University of Cambridge. From these lectures, published this year by Princeton University Press as The Nature of Space and Time, Scientific American has culled excerpts that serve to compare and contrast the perspectives of the two scientists. Although they share a common heritage in physics—Penrose served on Hawking’s Ph.D. thesis committee at Cambridge—the lecturers differ in their vision of quantum mechanics and its impact on the evolution of the universe. In particular, Hawking and Penrose disagree on what happens to the information stored in a black hole and on why the beginning of the universe differs from the end.

One of Hawking’s major discoveries, made in 1973, was that quantum effects will cause black holes to emit particles. The black hole will evaporate in the process, so that ultimately perhaps nothing of the original mass will be left. But during their formation, black holes swallow a lot of data—the types, properties and configurations of the particles that fall in. Although quantum theory requires that such information must be conserved, what finally happens to it remains a topic of contentious debate. Hawking and Penrose both believe that when a black hole radiates, it loses the information it held. But Hawking insists that the loss is irretrievable, whereas Penrose argues that the loss is balanced by spontaneous measurements of quantum states that introduce information back into the system.

Both scientists agree that a future quantum theory of gravity is needed to describe nature. But they differ in their view of some aspects of this theory. Penrose thinks that even though the fundamental forces of particle physics are symmetric in time—unchanged if time is reversed—quantum gravity will violate time symmetry. The time asymmetry will then explain why in the beginning the universe was so uniform, as evinced by the microwave background radiation left over from the big bang, whereas the end of the universe must be messy.

To continue reading this article, please download the PDF by clicking the link below.

'Gravity Waves' Offer Hope to Coral in a Warming Ocean

Here's How Some Species Will Survive Climate Change 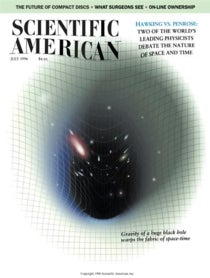