The title of this issue is a bit misleading. A fully explanatory and complete title would have gone something like: “Scientists Confirm Long-Standing Theory of Sun’s Power, but As with All Science, Many Questions Remain and New Ones Are Revealed.” Exhaustive, yes. Catchy? No. Though when it comes to attention-grabbing-if-slightly-truncated headlines, this one still holds water. As reporter Davide Castelvecchi reports, astrophysicists have long hypothesized that a small amount of the sun’s energy is generated by a particular reaction involving carbon and nitrogen in the star’s core, and can be detected by neutrino emissions (see “Neutrinos Reveal Final Secret of Sun’s Nuclear Fusion”). It’s always extremely satisfying when a scientific explanation is finally confirmed by direct evidence. In this case, the way that evidence was collected is fascinating, as are some of the further questions relevant to this research: What are the precise composition and temperature of the sun? What was our star like before the rest of the solar system formed? In science, it often goes that as soon as you’ve answered one question, you inadvertently have asked a dozen more. Call that frustrating or intriguing as you will.

Conflicting evidence about the weight of the cosmos is fueling a growing debate among physicists over the formation of the universe (see “How Heavy Is the Universe? Conflicting Answers Hint at New Physics”). And the surprise detection of radio bursts from within our own galaxy may help us resolve a larger cosmological phenomenon (see “‘Magnetic Star’ Radio Waves Could Solve the Mystery of Fast Radio Bursts”). But, you guessed it, this discovery is inciting a host of new questions waiting to be answered. I, for one, am intrigued.

This article was originally published with the title "The Scientific Question Machine" in SA Space & Physics 3, 4, (August 2020)

How Climate Change Strategies That Use Biomass Can Be More Realistic

Our Temporary Moratorium against Handshakes Should Become Permanent

Claims of 'Ocean' inside Ceres May Not Hold Water 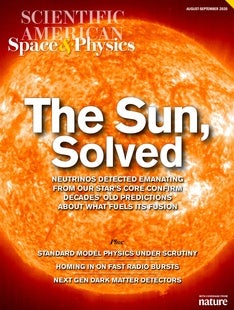