Some time around 35,000 years ago, when much of Europe was locked up in sheets of ice, an artist acquired a bit of mammoth ivory and began carving. A masterpiece emerged in the form of a two-inch-long horse. Its magnificently arched stallion's neck combines muscular potency and natural grace. Its head, slightly cocked, gives the animal an air of deep contemplation. One can almost hear him snort and see him toss his head, warning rivals to take care. No one knows who created this miniature marvel, dubbed the “Vogelherd horse” after the cave in Germany in which it was found, but it is clear that this ivory carver spent a lot of time watching wild horses, studying their social interactions and learning their body language.

Sadly, in the modern world, this pastime became something of a lost art. Equine scientists have studied the best way to train show horses, the best way to feed racehorses, the best way to heal the delicate bones in a lame horse's feet. But in contrast to the behaviors of wild chimpanzees, whales and elephants, among other species, the natural ways of horses have rarely garnered scientific interest. And of the few studies that were done, very few were long-term projects.

Recent efforts have begun to fill that gap—with surprising results. Scientists have documented behaviors among free-ranging horses that upend many long-held ideas about how these animals bond and interact with one another.

Horses are unusual among hoofed mammals. Many members of this group typically roam in large herds, seeking safety in numbers. Wild horses, in contrast, live year-round in small groups, or bands, of three to 10 individuals. Closely allied mares and their young offspring form the core of the band.

Members of a horse band are not simply group animals with ganglike mentalities. Researchers have found that, as with humans, individual bonds within bands may be more important than group identity. These bonds are sometimes based on family ties, but often they are just based on individual preference. These preferences can and do change: friendships come and go, foals grow up and depart to live elsewhere, male-female relationships sometimes work out and sometimes don't. As a result, the social lives of horses are nothing if not tumultuous. Indeed, long-term observation of these animals in the wild is like following a soap opera. There is a constant undercurrent of arguing, of jockeying for position and power, of battling over personal space, of loyalty and betrayal.

The latest ethological investigations—which is to say, objective studies of behavior under natural conditions—show that these power dynamics are more complicated than previously thought. The conventional view, as described in a recent National Academy of Sciences report, is that “a harem, also known as a band, consists of a dominant stallion, subordinate adult males and females, and offspring.” At first glance, this assessment would seem to be true: what people notice when watching wild horses is the uproar created by the stallions. But research by Jason Ransom of Colorado State University and others has shown that this male-centric view is wrong. Far from being subordinate, mares frequently initiate the band's activities. The stallions are quite often little more than hangers-on.

Ransom was once watching a band of mares that stopped grazing and began heading for water. The stallion didn't notice. When he looked up and saw his female companions leaving, he panicked. “He started running after them,” Ransom told me. “He was like a little boy calling out, ‘Hey, where's everybody going?’” The mares ignored him. Whether the stallion caught up or not didn't appear to concern them.

Mares also sometimes have stallion preferences. They resist males they don't like with surprising persistence, even when that male has established himself as the band's stallion. Joel Berger, now at Warner College of Natural Resources, studied the behavior of two nonrelated mares that had spent several years together. The pair joined a band that was then taken over by a new stallion that asserted himself by attempting to copulate with them forcibly on numerous occasions. The mares refused his attentions and repeatedly aided one another by kicking and biting the stallion as he tried to mate, Berger observed in Wild Horses of the Great Basin. It's long been known that female elephants cooperate, but before ethologists began systematically studying free-roaming horses, few people suspected that cooperating mares were capable not only of waging such a fight—but of winning it. Given the truth about mares, “harem” seems like such an old-fashioned word.

Fending off unwanted suitors is not the only means by which mares rebel. For years Laura Lagos and Felipe Bárcena, both at the University of Santiago de Compostela in Spain, have been studying the behavior of Garranos, an unusual type of free-roaming horse. Garranos live rough, tough lives in the rugged hills of northwestern Spain and northern Portugal, where they are under constant threat from wolves. In the course of their work, Lagos and Bárcena catalogued the behavior of a pair of mares in one band that were strongly bonded with each other and that often stood just a bit apart from the rest of the band.

Until scientists applied ethological research techniques to horses, few observers believed mares to be capable of such subtle deceit. They just weren't looking closely enough. It turns out that, unlike stallions, mares do not need to have huge fights to get what they want. Instead they use the technique of persistence. By way of example, Ransom tells the story of High Tail, a plain-Jane mare with a sagging back and poor coat. High Tail, so named because the dock of her tail sat a bit too high on her croup, is part of a population of wild horses that roam the Pryor Mountains in the American West. If you didn't know her life story, you could easily mistake her for a child's riding pony or a retired plow horse. With her glory days clearly over, you probably wouldn't give her a second glance. Yet Ransom's data showed that this mare had had a rich and varied life that involved a number of long-term male associates of her choosing.

Ransom first caught up with High Tail in 2003. The mare was passing her days in the company of Sam, a stallion born in 1991. Ransom thinks the two probably encountered each other during the wanderings of their youth. They stayed together for years. Eventually other mares joined them, forming a band. Research shows that roughly half the time mares and stallions bond in this peaceful fashion. There's no need for a stallion to “conquer” the mare; she is often a more than willing partner.

Shortly after Ransom began following High Tail and Sam's band, he noticed a second young stallion hanging around a short distance away. Sam did not welcome this new stallion, dubbed “Sitting Bull.” The more Sitting Bull tried to become part of the group, the more Sam fought him off. Sam spent a good deal of energy trying to drive away the younger stallion but to no avail.

His chance came in 2004. Horses that live at the base of the Pryor Mountains constantly face the challenge of finding freshwater. High Tail's band often descended the steep walls of the Bighorn Canyon gorge, where they could drink their fill. One day they went down as a group. Sam did not allow Sitting Bull to come along. While the young stallion waited above, the rest of the horses stood on a small ledge and drank. Off in the distance heavy rains broke out. A flash flood inundated the gorge, cutting off the animals' escape route. For about two weeks High Tail and her band, along with Sam, remained trapped without food.

Realizing that the situation was dire, people intervened and helped them escape. The severely emaciated animals managed to climb up out of the gorge. Sam in particular had lost his muscular physique. Almost dead from starvation, he was easy pickings for Sitting Bull, who had hung around above the gorge. When the horses came up, Sitting Bull “just swooped right in and drove Sam off,” Ransom says. Sam tried repeatedly to repel his younger competitor, but he was no longer strong enough.

Most of the band accepted the young stallion. Not High Tail. At every opportunity she left her band and headed off in search of her longtime mate, Sam. Each time she left, Sitting Bull chased her back, snaking his head and baring his teeth to threaten her with injury. To avoid being bitten, she complied and returned to the band, but the next time Sitting Bull failed to pay attention, High Tail took off again. This went on for many weeks until the younger stallion gave up chasing her. “From then on it was just Sam and High Tail,” Ransom says. “They got their weight back, and at first Sam tried to drive Sitting Bull off and get back with the other mares, but each time he tried, he failed.”

High Tail stayed with Sam until he died in 2010. (Because of the stress of constant fighting with other males, stallions often live much shorter lives than mares.) After Sam's death, researchers saw High Tail with a stallion they called Admiral. Eventually Admiral fell out of favor with her. Ransom doesn't know why.

We saw High Tail one afternoon that July. She was with two other horses. One was a mare from her original band, an animal she had known for years. The other was Sitting Bull. Rejected by High Tail in her younger years, he was now one of her boon companions. Primate field researchers long ago discovered the ebb and flow of alliances within primate troops, but until recently no one has watched horses in the wild closely enough to understand that they, too, behave this way. I asked Ransom if he thought there were any hard and fast rules about horse behavior in the wild. “They rarely choose to be alone,” he replied.

The Importance of Ethology in Understanding the Behavior of the Horse. D. Goodwin in Equine Veterinary Journal, Vol. 31, No. S28, pages 15–19; April 1999.

Wendy Williams is a journalist and equestrian based in Mashpee, Mass. She has written for the New York Times, the Wall Street Journal and Audubon, among other publications. The Horse is her sixth book. Credit: Nick Higgins 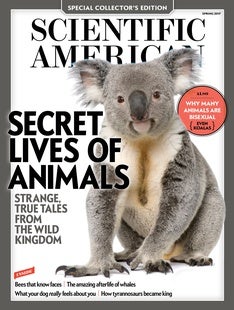