It has never been a given that humans would survive on Earth. We have likely faced extinction several times in our evolutionary past, according to genetic analysis. The ease with which the novel coronavirus has swept around the planet reminds us that there are no guarantees. And yet we are a species to be reckoned with. We have accomplished a great deal in our relatively short history—extended our life spans, discovered vast knowledge about our world and ourselves, harnessed resources to improve quality of life, and developed rich histories of art and culture. For better or worse, the human legacy on Earth is unparalleled.

How did we get here? It turns out that our evolutionary story is not a linear progression from ape ancestor to human. Each fossil discovery is a knot in a messy tangle of evolution that led to Homo sapiens. Our large brains helped to solve the complex test of primitive survival, and interpersonal relationships and altruism may have given us a strong advantage over other hominins. And such development is far from over: modern humans continue to adapt to our changing world, even if we often feel that we have somehow bested natural selection.

And what a world we've made. We have built a behemoth of financial systems, global communication and trade networks, and information technology. The benefits of those systems are not evenly distributed, leaving many lacking basic resources and health care. And now some economists have started to wonder if we are using the proper tools to measure the value of a society. To be sure, our life expectancy has more than tripled over the course of our two-million-year story. At the same time a rapidly warming world, increased land use and growing inequality will undoubtedly give rise to new threats to health and longevity.

Human progress has had measurable effects on the planet, even down to the layers of concrete, plastics and nuclear waste we leave behind—indelible enough, perhaps, to mark a new geologic era. A drastically changing climate will require bold action and adaptation on our part, including tackling the disproportionate impact that environmental degradation has on the world's poor and oppressed peoples.

The ingenuity that launched us to the top of the evolutionary food chain could also fast-track major improvements for life on Earth. Cities, which house more than half the global population, might become the hotbeds of sustainable solutions that cut down on both resource consumption and pollution. And local and rural communities that manage their own food production and wealth could end up more self-sufficient and in harmony with the natural world.

Of course, this story is far from over. If we make the right decisions now, the next era on Earth might be named the Sapiezoic, or “wise life.” Such a time would be characterized by sustainable prosperity and peace afforded to all people and fueled by that distinct tenacious creativity that is undeniably human.

This article was originally published with the title "The Story of Us" in SA Special Editions 30, 4s, 1 (September 2021) 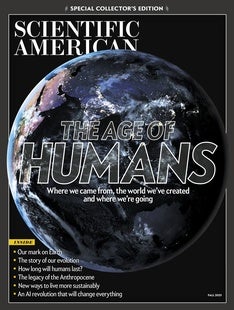