In April a team of physicists at Fermi National Laboratory in Batavia, Ill., announced anomalous behavior in the magnetic wiggle of the muon. The signal suggests that there may be other forces at work affecting the particle’s behavior besides those predicted by the Standard Model of physics (see “Long-Awaited Muon Measurement Boosts Evidence for New Physics”). But as physicist Sabine Hossenfelder outlines in her fascinating analysis of this finding, whether or not this discovery upends the classical rules depends on mind-bending statistics and higher-level calculations aided by computers to determine whether we have seen something significant or are merely observing a number- crunching fluke (see “Is the Standard Model of Physics Now Broken?”).

Elsewhere in the subatomic world, researchers are hoping that quantum hard drives might one day collect and store photon data from optical telescopes spread across the planet (see “Quantum Astronomy Could Create Telescopes Hundreds of Kilometers Wide”). Though invisible to human eyes, subatomic particles have been called the building blocks of matter and may be the key to understanding the nature of our universe.

This article was originally published with the title "The Subatomic Keys to the Universe" in SA Space & Physics 4, 3, (June 2021) 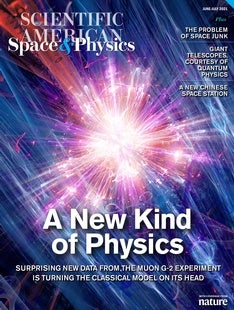