Relativity, a lithograph print by the Dutch artist M.C. Escher, portrays a world with three orthogonal sources of gravity, in which people climb and descend stairwells that seem to go uphill both ways. The disconcerting artwork is based on Schröder’s Stairs, a two-dimensional ambiguous image named after its eponymous creator. Though Escher popularized and expanded on Schröder’s concept, he kept it on a bidimensional plane. But can Schröder’s Stairs exist in 3D space?

A 2013 YouTube video created by Michael Lacanilao, then a film and animation graduate student at the Rochester Institute of Technology (RIT) in New York, featured a “real life Escherian Stairwell” at the RIT. Alas, it was a clever hoax. “Quite obviously no physics-defying ‘Escherian Stairwell’ exists in the real world,” explains the fact-checking website Snopes. “The video was a bit of trickery created through the use of deceptive camera angles, careful editing, and digital effects.”

Whereas a true instantiation of an “Escherian Stairwell” remains out of reach, a new illusion by mathematician Kokichi Sugihara of Meiji University in Japan, winner of the 2020 Best Illusion of the Year Contest, might have come as close to it as physically possible in our reality.

Sugihara’s “3D Schröder’s Staircase” shows that we interpret 3D objects as a function of our perspective. The images above showcase the same staircase from two different but simultaneous perspectives (by means of a mirror). As a result, we see a traffic cone at the top of the stairs in one perspective, but that cones appears to be at the bottom of the stairs in the second perspective. In reality, the stairs are as flat as a pool table, but shaped just so, with mathematical precision, so that the same drawn-on line intersections appear to be concave from one viewpoint but convex in its mirror-image. Thus the “stairs” go down from one perspective and up from the other.

The perceptual dissonance may have to do with our brain’s predilection for rectangular shapes “among infinitely many possible interpretations,” says Sugihara. “The brain usually tries to interpret [a planar-face object] as an object with as many rectangles as possible, which in this case is a staircase.”

A Timeline of How Abortion Laws Could Affect Pregnancy Decisions

U.S. Looks to Extract Lithium for Batteries from Geothermal Waste 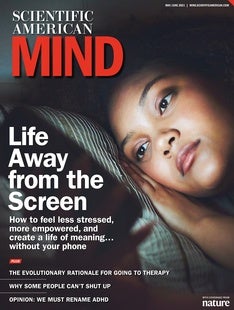