In March physicist Stephen Hawking passed away after living for more than 50 years with amyotrophic lateral sclerosis, a devastating neurodegenerative disease that confined him to a wheelchair for most of his life. Revered for his description in the 1970s of the radiation emanating from black holes, he became a cultural icon, authoring best-selling books and appearing in documentaries and sitcoms as recently as March. His death spurred a global outpouring of tributes from fellow scientists, world leaders and celebrities. Perhaps his popularity resulted from his resilient pursuit of knowledge—a reminder of the power of science to inspire and uplift.

Several of this year’s discoveries in cosmology and physics invoke that Hawking-esque wonder. In May radar observations revealed what seems to be a liquid lake underneath the surface of Mars. Since the detection of gravitational waves three years ago, the results have been rolling in, now combining with light measurements that help to quickly triangulate cosmic detections in a novel type of astronomy.

Discoveries in laboratories are no less impressive. Recent insights that the brain works mechanically rather than electrically and in close cooperation with the immune system could transform neuroscience; by examining wear patterns on ancient hominid teeth, paleontologists have also revealed the true human diet (hint: it’s good news for foodies, bad news for fad diets).

The ever changing earth kept scientists on their toes in 2018. Rising seawaters are forcing the relocation of many coastal communities and causing a societal rethink over where we build; a dazzling eruption of Hawaiian volcano Kilauea is yielding data that will (hopefully) tip off geologists to the next big blow, wherever it might occur.

Science took center stage in many societal hot topics. Innovative digital models are helping epidemiologists get a handle on the opioid crisis and ways we might combat it. Economist and Nobel Prize winner Joseph E. Stiglitz has some recommendations for how to rebalance a growingly inequitable society. Tech researchers are devising better safeguards against the next fake news culprits: videos altered using AI.

Hawking once wrote: “Scientists have become the bearers of the torch of discovery in our quest for knowledge.” Never has it felt more true that wherever there is an unresolved question, desperate need or global phenomenon, you will find science.

This article was originally published with the title "The Year in Science" in SA Special Editions 27, 5s, 1 (December 2018) 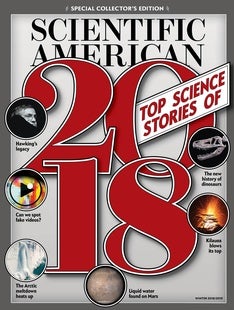