About 1.3 billion years ago two black holes collided and sent undulating waves outward through spacetime like ripples on a pond. Here on Earth in the fall of 2015, a sensitive laser-based instrument recorded the waves and offered the first tangible evidence of black holes since Albert Einstein theorized their existence more than 100 years ago. And now, for the first time, scientists have taken a photograph of a black hole. As Lee Billings reports in “At Last,” at least nine radio telescopes across the globe linked together and snapped the image of the black hole at the center of the Messier 87 galaxy. Aligning with Einstein’s predictions, the center of the black hole is a dark shadow, surrounded by a vividly glowing ring of gas. As Carl Sagan once said, extraordinary claims require extraordinary evidence. And we can now say—more than ever—that we have the extraordinary evidence to conclude that black holes exist. Einstein, I surmise, would be pleased.

Elsewhere in the world of abstract theoretical physics, Anil Ananthaswamy reports that a group of mathematicians working on the “F-theory” branch of string theory has stumbled on a quadrillion—yes, three more zeros than a trillion—new potential solutions to string theory (see “Found: A Quadrillion Ways for String Theory to Make Our Universe”). And nearly 10 years on Christine-Maria Horejs and Giulia Pacchioni cover the many upgrades and future projects in the works at CERN (see “CERN’s Next Big Thing”). The quarry of physics research is vast, and we are now netting some admirable catch.

This article was originally published with the title "Theories Realized" in SA Space & Physics 2, 3, 2 (June 2019) 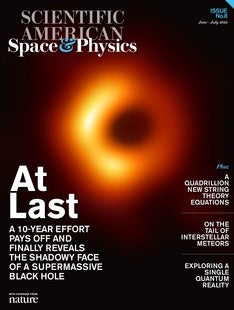