In our last issue we briefly noticed that a motion had been introduced into the English House of Commons to abolish the patent system. We have since received files of the English scientific journals, which uniformly oppose the proposition as unjust anl not likely to receive the sanction of the government. In another column we print a spirited article upon the subject from the Scientific Review. Engineering also denounces the scheme in an able editorial article, and while recognizing certain evils connected with the English patent system, it characterizes the proposition to abolish as " cutting off the head of a patient in order to get rid of a tumor or wen." The Mechanics' Magazine, a journal which has long sustained the rights of inventors, gives an account of the proceedings of a committee delegated on behalf of the " Inventor's Institute," to wait upon the Attorney General, for the purpose of presenting to that officer their views of the importance of the patent laws to all the industrial interests of the nation. The Attorney General expressed himself as opposed to the motion which had been introduced by Mr. Macfie, who seems to be a very- insignificant personage, but nevertheless capable of doing some mischief. The Committee submitted to the Attorney General the following cogent reasons why the motion of Mr. Macfie should not prevail: 1. It is the duty of the state to encourage invention by every legitimate means, in order to enable this country to maintain its supremacy in mechanical and chemical arts. 2. That the inventor is entitled to reasonable remuneration for his lab.T, expenditure, and skill, equally as much as the author or the artist is entitled to copyright for his book or work of art. 3. That the patent system, though defective, is the best practical method oi remunerating inventors yet devised, inasmuch as under it those persons only who use inventions, and to whom, therefore, they may be assumed to be of service, pay for their use. 4. Experience shows that no system of rewards from the state could ever be made to work satisfactorily, either in the interests of inventors or the public. 5. The inventor, as distinct from the manufacturer, has a right to be heard before the patent laws are abolished or materially altered. 6. Inventorsand specially those belonging to the working classes, to which classes the great majority of inventors belong are entirely opposed to the abolition of the patent laws, though they earnestly desire their amendment. 7. Tht by a good system of patent law the progress of the trade and industry of the country would be largely benefited, as the whole inventive talent of the nation will be thereby incited to strenuous and continued efforts to maintain our industrial position against the very active pressure of foreign competition now affecting our commercial prosperity. 8. That working men, who are largely represented by the present deputation, are especially anxious to find themselves in a position, under an amended patent law, in which they can not only safely exhibit their inventions in public, but be enabled to reap the fruits of improved education and increased application of invention.

This article was originally published with the title "Threatened Extinction of Patent Rights" in Scientific American 20, 26, 407 (June 1869) 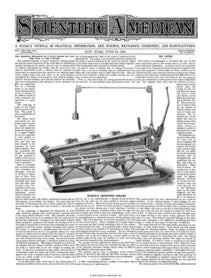