As you read this word, and now this one, some billions of subatomic particles called neutrinos are whizzing through your body. The most mind-boggling aspects in physics are often the invisible ones, as well as where the biggest research booty lies. Discovering the nature of that we can’t see in the universe promises to answer the most enticing cosmic questions: What spurred the formation of the universe, and what propels it ever outward? So while they can’t see neutrinos, physicists still want to learn all they can about them. As Clara Moskowitz reports in “Mysterious Neutrinos Get New Mass Estimate,” the mass of neutrinos—yes, they have some—has upper limits. Further, the more we learn about this mysterious particle, the more we question the Standard Model of particle physics.

Back in the visible realm, Shannon Hall describes the renewed push to explore the planets Neptune and Uranus, which have been on the back burner for decades (see “The Solar System’s Loneliest Planets, Revisited”). And if it seems like discoveries in physics and astronomy are constantly ramping up, think of the torrents of data rolling in from the telescopes and detectors on Earth. As Anil Ananthaswamy reports, multimessenger astronomers are turning to machine learning to help them process the influx of measurements pouring in from exploding stars, galactic nuclei and colliding neutron stars, to name a few (see “Faced with a Deluge, Astronomers Turn to Automation”). Visible or not, we’re diving in.

Partisan Differences over the Pandemic Response Are Growing

How 'Cognitive' Tech Can Prevent a Food Crisis

The Boulders of Lyell Canyon

20 hours ago — Tom Garlinghouse and Sapiens 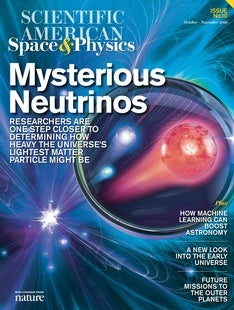