Last year biologist Gloriana Chaverri and her students confirmed a hunch about trapping bats to study and release. They experimentally hung fine-corded monofilament nets in Costa Rican foliage, snagging 125 bats from 20 species. Meanwhile typical, thicker-stranded nets captured only 90 of the flying mammals from 14 species. In Royal Society Open Science, her team from the University of Costa Rica and Smithsonian Tropical Research Institute explores how equipment choice can influence what scientific expeditions reveal. And Chaverri says that although the finer nets changed the researchers’ group dynamics—there was less chatting because they had to pay more attention to extract bats from the tangle-prone web—monofilament nets are now a fixture in her tool kit.

Scientific American spoke with Chaverri about bat-catching protocols, elusive insectivores and what new takes on old technology can reveal about an ecosystem’s inhabitants.

How do you hang nets to catch bats in the wild?

The best places are cluttered but not so much so that the bats are not flying along those routes. If the area is devoid of vegetation, then the bats will very easily detect the net. The nets are always hanging close to the ground, and if you’re not experienced, stretching the nets takes a long time because you need to be very careful—they get tangled in your clothes.

The best time to open a net is right at sunset because the bats are so hungry by the end of the day that you get the majority captured between six and eight [P.M.] here in Costa Rica. Usually we try to stay until midnight. For the regular nets people have been using for years, the threads are resistant to the bites from most species of bats, so we open up the nets and then keep visiting them every 15 to 20 minutes.

What made you want to formally test the differences between the older, thicker nets and monofilament ones?

The first time I saw this type of net was in 2013 at a bat meeting in Costa Rica. I’m always up for trying new things, so I purchased one. I went out one time, I placed the net, and all of a sudden I was capturing these species that I had never captured before. I started thinking: “Hmm—this is interesting.”

I did a project a few years back in Uruguay, and we purchased only monofilament nets. I was presenting the results to other bat researchers, and they asked me, “How on Earth were you able to capture so many bats?” I showed them the nets, and they were all very excited. That’s another point that made me think maybe this should be published, because a lot of people don’t know about the availability of this other net.

What did you find when you specifically compared the two nets?

I think the differences were very noticeable. The main thing is the species that we’re getting: the regular nets are missing a lot of the insectivorous bats that we normally see very rarely. Untangling bats from a monofilament net really is more challenging overall. The threads are difficult to see, so if researchers are not careful they could unintentionally pull a thread tangled around soft tissues and hurt the bat.

Another study recently compared different net designs and found that very fine nets were less successful. Why do you think that is?

The bats are good at chewing up the monofilament net and getting released. [The other research team] checked the nets as if they were regular nets, every 15 or 20 minutes, [compared with our study’s] every two to five minutes. Sometimes you don’t have enough field personnel to be checking the nets so often. I think the combination of our two papers shows the pros and cons of using the monofilament nets ... and will allow a lot of people to start thinking more about what equipment to use, based on the questions they have. People place [traditional nets] and assume that whatever they’re getting is what’s out there. Of course, many studies show that’s not true—but we still use them.

How big a role do equipment choices like these play in what you learn?

Oof—yeah, they play a big role. [Papers suggest] we’re missing a big part of the bat assemblages that we have, for example, in the Neotropics.... I think the monofilament nets are one of those instruments that we have to take advantage of, especially because they’re fairly cheap and easy to use. I keep telling everyone about these nets. Whatever way I can help researchers reach conclusions that are closer, more or less, to the truth, I think that’s definitely a good thing for everyone.

This article was originally published with the title "Bat Inspection" in Scientific American 326, 4, 16 (April 2022) 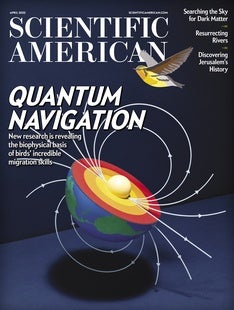