Not even six months ago astronomers achieved a major milestone by successfully launching the shiny new James Webb Space Telescope. This summer we expect the observatory to start streaming data back to Earth, sharpening our eyes on the cosmos. And in May a planet-spanning, state-of-the-art observational tool—the Event Horizon Telescope—yielded the first image of the black hole at the center of our own Milky Way galaxy, Sagittarius A*. Chief features editor Seth Fletcher attended the announcement of the image in Washington, D.C. (see “The First Picture of the Black Hole at the Milky Way’s Heart Has Been Revealed”). You can also go online to learn more about why the picture looks like it does and listen to Fletcher explain the science behind capturing the black hole. Never before have our sights been so trained on the astounding universe.

This article was originally published with the title "Unblinking View of the Universe" in SA Space & Physics 5, 3, 2 (June 2022) 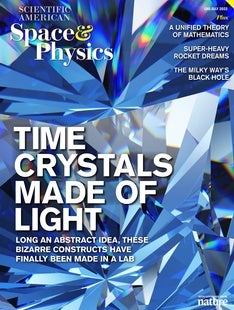