The story of how the universe came to be is constantly evolving. Indeed, a trove of fresh data rolling in from the Gaia spacecraft is refining our view of the early years of our galaxy. A violent collision with a second galaxy about eight to 11 billion years ago left a cohort of stars strewn askew from the plane of the Milky Way—the fingerprint of early galactic growing pains (see “Hidden History of the Milky Way Revealed by Extensive Star Maps”).

At the larger scale, the long-standing estimates of the rate of universe expansion are under scrutiny, as new measurements don’t seem to align with the old. Some novel fundamental physics may be at work (see “Have We Mismeasured the Universe?”). Rather than an ever evolving story of the universe, perhaps it has always been the same but written in a code we can’t understand or break. With each telescope, each spacecraft we send into space, each new technological advancement we achieve to collect data on Earth, we are learning how to read the code and deciphering its entirety piece by piece.

On a much smaller scale, a team at the Massachusetts Institute of Technology has turned two layers of graphene—a single-atom-thick layer of carbon—into a superconductor. The discovery has the potential to revolutionize several modern technologies, including transportation and computing (see “How ‘Magic Angle’ Graphene Is Stirring Up Physics”). Large or small, the physics code breakers are revealing quite a tale. Enjoy!

This article was originally published with the title "Universe Cryptography" in SA Space & Physics 2, 2, (April 2019) 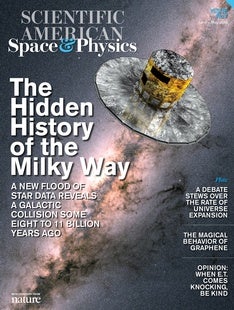