This valuable and nutritious esculent is not only useful to us in the many te^nptiiag forms in which it is presented in its ^unmistakable character, but the farina extracted from it is largely used for other culinary purposes. The famed gravies, sauces, and soups of France are largely indebted for their excellence to that source, and its bread and pastry equally so ; while a great deal of the so-called Cognac imported into America from France is the product of the potato, and imbibed as the pure essence of the grape. The fair ladies of our country perfume themselves with the spirit of potato, under the designation of eau de cologne. But there are other uses which this favorite esculent is turned to abroad. After extracting the farina, the pulp is manufactured into ornamental articles, such as picture frames, snuff-boxes, and several descriptions of toys, and the water that runs from it is a most excellent scourer. For perfectly cleaning woolens and such like articles, and curing chilblains, it is also successfully employed.

This article was originally published with the title "Uses of the Potato" in Scientific American 13, 41, 323 (June 1858) 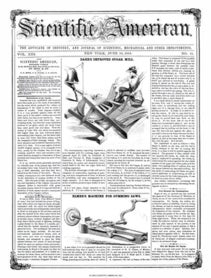