All are familiar with one of the many definitions given in the works on physics, of the term Vis Inertia— a want of power in a body to move itself when at rest or to come to rest when in motion. As however no human eye has ever seen a body or matter in a state of absolute rest, and as we know nothing of matter in that state, it is perhaps to be doubted whether we are justified in predicating anything of it in that condition. In fact it is quite possible that matter does not anywhere in the universe exist in a state of rest; and it seems quite consistent with the facts already established in physics, to consider motion as an essential condition of the existence of matter, that is so far as any knowledge of it & obtainable through the medium of our senses. All the ideas we can get of matter are inseparably connected with motions of atoms, molecules, or masses. Let these motions at once and wholly cease in any aggregation of matter, and we have not the slightest ground to suppose that its existence would be determinable by us. We could walk through it without experiencing any resistance; it would no longer have color, form, weight, or any of those characteristics by which we are able to recognize material objects. But while we know nothing of the state called rest, we see around us everything in motion and refusing absolutely to move less, without increase of motion in some other matter. Nay, the amount oi motion lost in any body must be exactly compensated for by the motion of other matter. Nature will iiut pcunit a loss from the sum total of motion of even an infinitesimal amount. Her books always balance. We see then that of matter at rest we know nothing, and consequently, can predicate nothing. In moving matter we see the most positive tendency of motion to continue. Note this is not a negative proposition. Motion is as positive a property of matter as gravity. Now, if vis inertia means anything, it is negative in its signification. It means that a body cannot, of itself, change its state, whether that state be one of motion or rest. Now, we might go on to any length and predicate negative qualities of matter without giving or attaining a single idea in regard to it. To say that vinegar is not sweet, would give no idea of vinegar to any one who had no knowledge of it. It is only when we assert some positive quality that ideas are conveyed. If we say vinegar is sour, then we express a quality of vinegar, and a definite idea is conveyed by our language. When we say, as does Bartlett.in his Philosophy of Mechanics, that matter is inert in relation to the state of motion and rest, we are either hiding a negative meaning in a positive form of expression, or stating a false proposition. Many modern writers have seen this and have dodged the issue in their definition of inertia, in so far as they have confined it to the tendency which bodies have to maintain such motion as they possess. Now we submit—and we believe the greater number of those who write and think upon this and cognate subjects -will coincide with us in the opinion—that if it be desired to indicate ths tendency of motion to continue, no more inappropriate term could have been selected to indicate this property than inertia. The use of terms which in their primary signification mean one thing, to indicate something which is not only different but diametrically opposite, is not, to say the least, logical; and the different views of the real meaning of the term in question, have not only given rise to differences in opinion but also to grave error. The term is the offspring of obsolete notions of force, and the attempts to make it do duty in the vocabulary of modern science should be abandoned. Certainly it would not be difficult to agree upon a substitute that should aptly characterize the tendency of motion to continue, and shake ourselve3 clear of ideas pertaining to a purely hypothetical state of matter—rest. 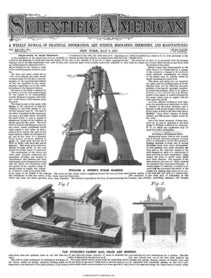