THE conservative behavior of Weather lureau thermometers during the heated term has always ,been viewed with a certain degree of dissatisfaction by the non-scientific 'portion of the American public. After a particularly torrid day in an environment of brick and mortar, asphalt and steaming humanity, the wilted citizen, whose sensations have registered a temperature of 100 or more, feels aggrieved at a newspaper weather report recording an official maximum of 85. His only COlsolation was, until recently, the thermometer at the corner drug-store. This imposing-Iooking instrument usually soared nearly or quite high enough to confirm his personal estimate of the day's weather; especially if it happened to be hung in such a position as to bask in unobstructed sunshine during a part of the day_ Some If these drug-store thermometers are fearfully and wonderfully made. As adjuncts of a quasi-scientific branch of trade they enjoy a certain prestige-along with the charts, also affected by drug-stores, in which the professional long-range weather prophet outlines the meteorological conditions for a month in advance on the ,basis of the moon's phases, the configuration of the planets, or the mlxima and minima of sun-spots. At meteorological observatories the instruments are exposed in such a manner as to register, as nearly as the general surroundings will admit, the natural rather than the artificial weather. If, as in thp case of most stations of the national 'Veather Bmeall, the location happens to ue the heart of a city or town, the ideal, not wholly attainable, is to record the conditions that “would prevail if the buildings and pavements were not there. The abnormal weather of a city street is of no importance in gaging the weather of the country at large, either with a view to compiling climatic statistics or to providing information of current conditions for the use of the scientific forecaster. On the other hand, the demand of the “man in the street” for an accurate reeord of the eonditions prevailing in his own little sphere is nat- Fig. I. -German weather kiosks in the making. ural and legitimate; and the off<ial weather service has reeently responded thereto by establishing “kiosks." The first Weather Bureau kiosks were erected in the year 1908, and they have now become familiar landmarks in most of our largest towns. The name “kiosk” officially applied to them is convenient, rather than appropriate. Their arehitecture is severely classical, and therefore as remote as possible from that of the oriental structures to which this name properly belongs. Meteorological instruments installed in little pavilions on the public streets are familiar to every one who has traveled in continental Europe. In German-speaking countries these structures are called Wetter-saulen ("weather-columns") ' as they have a somewhat columnar form. In French they appear to have no generic name, but the writer is aware of one case in France-viz., at Le Mans-in which an installation of this general character has been called a “kiosq'le meteorologique” for the past twenty-five years, although its appearance is not in the least oriental. No English name for these structures existed-probably because the thing itself was unknown in English-speaking countries-until the Weather Bureau decided to install such arrange·· ments in this country. The catalogues of several foreign instrument-makers were examined with a view to finding the most suitable form of construction. Here the name “kiosk” was encountered as applied to one of these edifices that happened to have some semblance of o r i e n tal architecture. Faute de mieux this name was adopted by the bureau, although an entirely different style of construction was decided upon. The external appearance of the Weather Bureau kiosk, which was designed in America, is shown in Fig. 2. The structure, which is of cast iron, painted a light color, is square, and the instruments are installed on the north side, so as to be sheltered as much as possible from the direct sunshine. The other three sides are used for posting . weather maps and bulletins and other literature Of general interest pertaining to the weather and climate of the locality. The location chosen is the busy center of a town; either a public park or the pavement of a principal street. Air is freely admitted through gratings at the fop and base to the roomy interior, and into this central space project the bulbs of the thermometers and the other actuating parts of the instruments, which are thus screened from the radiation of surr.Qunding objeds. The set includes a hair-hygrometer, with a scale of percentages of relative humidity; a plain mercurial thermometer of large size, graduated on the stem in consvicuous figures; self-registering maximum and minimum thermometers, the indexes of which are set by a magnet; a tipping-bucket rain-gage, the receiver of which is placed on the- roof of the kiosk, while the dial, recording hundredths of an inch of rainfall, is exposed to view in the north panel; and a thermograph, making a continuous record of the temperature on a band of paper providing for a two weeks' registration. Printed labels briefly describing the several instruments render their use clear to the non-scientific publie. The instruments are kept in order, the record-sheets changed when necessary, the (Continued on page 485.)

This article was originally published with the title "Weather “Kiosks” at Home and Abroad" in Scientific American 105, 22, 477 (November 1911) 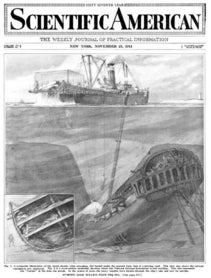