One of the most striking features of modern American building is the great favor with which the material known as brown sand-stone or brown iree-stone is regarded. It is a rich colored sand-stone admirably adapted to the production of fine architectural effects ; it is cut with great facility and is not too expensive ; yet notwithstanding these great advantages it lacks an essential quality of all good building stone durability. We have noticed lately several articles upon this subjcct, which would, independent of our own observation, have con vinced us of this ; but as long ago as 1854 we asseited that this stone could not endurefiur climate. Since that time we have made numerous observations, all which have confirmed the opinion then formed. It is rare that the condition of brown stone exposed fifteen or twenty years to the action of weather cannot be expressed , by the word “ scaly ;” and we were assured once by an extensive builder who has in his life erected a great many brown stone fronts, that in his opinion the life of the fronts would not without repairs, average over thirty years. We have in mind a large building in which this material was employed and which has stood certainly not more than fifteen years, yet which now exhibits unmistakable signs of incipient decay. Nothing was omitted to make this building permanent but a proper selection of material. Fifteen years more unless the crumbling blocks shall be taken out and replaced by new ones will certainly make sad inroads into this costly and elegant structure. A writer in Appleton's Journal has recently called attention to the condition of Trinity church in this city which he states to be in a state of incipient decay, though confessedly built of the best brown sand-stone this country affords. He also calls attention to the ultimate result of this decay as shown in the tablets and tombstones of old cemeteries, that of Trinity church in particular. Here, he remarks, “ rough, unsightly slabs will be found, which once were tablets, recording the virtues of the mortals whose memory they were intended to perpetuate ; yet now they stand, and that is all, a collection of scarcely cohering strata, ready to fall in fragments at a touch. The greater exposure of these stones has but accelerated a result which will be the fate of all things in which this material is used." The writer of the article referred to, concludes as follows : “ The present generation will scarcely see the palaces of Our millionaires transformed into seamed and broken ruins; but what will be the condition of these buildings a hundred years hence, or even in fifty years ?" To suppose that our architects have been all along ignorant of the defective character of this stone would be scarcely more complimentary than to suppose they had encouraged its use in full knowledge of its deficiencies for the sake of gain. One or the other of these suppositions must, however, hold good. It can hardly be supposed that such material would have been placed in the many costly brown-stone churches to be found in this country in the face of an earnest protest from conscientious architects. Such protests would be likely to be regarded also by private individuals about to erect mansions for their own use, however little they might have availed when made in reference to buildings erected by the general, State, or city governments. The history of the latter class of buildings has been one of shameful jobbing, in which private interests have nearly always been considered as paramount to the public welfare. It is time that in American architecture the element of permanency should begin to be considered. Hitherto there has been some excuse for temporizing and there may still be the same excuse in new and rapidly growing cities, in which the changes twenty or thirty years will produce can hardly be predicted, but in older cities like New York or Philadelphia it would seem that no element of uncertainty need remain to interfere with the adoption of a solid and substantial method of building, in which mere outside display should not override every other consideration.

This article was originally published with the title "What is to Become of our Brown-Stone Fronts?" in Scientific American 21, 20, 313 (November 1869) 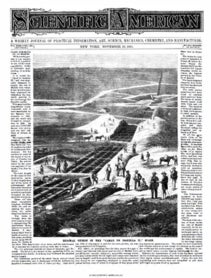