In the 1967 episode of Star Trek “The City on the Edge of Forever,” the crew of the Enterprise finds itself on an alien planet and discovers a large, doughnut-shaped machine referred to as a “time portal” that can transport anyone across spacetime to any time or place in the universe. Though not explicitly called a wormhole, it is one of the earliest appear- ances of the theorized cosmological phenomenon in popular science fiction. And certainly not the last. The intriguing prospect of traversing hundreds of millions of light-years in an instant is explored by numerous films, from Thor to Inter- stellar—not to mention several more episodes of Star Trek in all the various iterations of the franchise over many decades. But the existence of wormholes, while hypothesized, has never been proved and remains a controversial topic in physics. As Jonathan O’Callaghan explains in “Hidden Passage: Could We Spy a Traversable Wormhole in the Milky Way’s Heart?” a team of researchers now proposes that we might be able to determine the existence of a wormhole by mea- suring gravitational pulls from stars on the other side of the portal. It’s a fascinating premise, and we won’t have to wait until stardate 48579.6 to get the results.

In a special report in this issue, we present some of the latest news on quantum technology. Investments are pouring into this research that promises to revolutionize encryption, medical imaging and basic computing, as Elizabeth Gibney writes in “The Quantum Gold Rush,” the first article of this series. But will the upfront costs bear fruit? Many physicists are betting that this new wave of technology will live long and prosper. (Sorry, I had to.)

This article was originally published with the title "Wormholes within Reach?" in SA Space & Physics 2, 6, (December 2019) 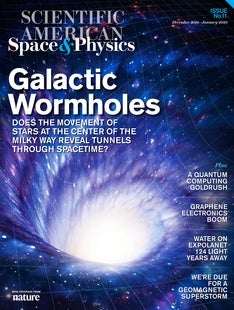