RATHERa striking contrast is offered by the pitiful wrecking of the first non-German rigid dirigible, the British naval airship “Mayfly” which broke in two before it even got into the air, and the many excellent performances of Count Zeppelin's new “Schwaben” which at last completely fulfills what the advocates of the rigid system and of the mammoth dirigible so long promised seemingly in vain. When the British ship first came out, it claimed a considerable advance., over the Zeppelins, but before its trials could begin in earnest, even its claimed superiority had been far surpassed by the “Schwaben” actual performances. Its ultimate fate seems to offer a striking object lesson of the fallacy of judging the merits and demerits of a theory from isolated experiences. It is interesting to try analyzing the causes of this accident from the point of view of the Zeppelin practice. It must be pointed out as a fundamental mistake for an airship to be taken on water from a stationary shed on land in side wind, even though alight one. In 1906 Zeppelin and his engineers had much yet to learn, but even then they were careful to avoid taking the Zeppelin II from its stationary shed on the shore of Lake Constance, near Manzell, when the slightest wind was blowing across the entrance. The number of trials that season was much limited on that account, but no exception was made to the rule. It is difficult to hold an airship against lateral wind pressures, and the cars floating on the water and partly submerged cannot yield to a gust as quickly as over land. For this reason the principal Zeppelin sheds on the lake were floating structures, which always swing automatically into the direction of the wind. Much light is further shed on the naval dirigibles misfortune if we recall that the first frame attempted by its builders was avowedly a complete failure, and that right before the first coming out of the ship there had been trouble from the tearing and leaking of the internal gas bags. The first picture of the accident shows the damage all confined to one compartment, and it is reported that the accident originated with the tearing of the gas bag contained in this compartment. The simplest consideration shows how very much the structure of a rigid dirigible is weakened if one compartment near its center should suddenly be deflated. It is a fundamental fact that the solidity of a rigid dirigible results chiefly from aerostatic pressure of the gas in its different compartments. The frame of the first ;Zeppelins partly collapsed over night, when there was no gas in the ship, and some of the ropes by which it was suspended from the ceiling of its shed gave way for some unexplained reason. But if the whole hull represents two halves with gas in each, the case is worse. All the leverage of the Hft in these halves is then exerted against the framing of that single compartment, the weight of each car acting as a fulcrum. If there were gas in it, this compartment would not only compensate the strain to a certain extent by its own lift, but furthermore, the pressure of the gas sideways, against the flat ends of t.he cylinder formed by its gas bag, would most strongly brace it against exactly the kind of strain it encounters. At the point where the strain tries hardest to crush the longitudinal members by compression, namely, along the top, the side pressure of the gas is strongest. One needs but to recall the appearance of an ordinary spherical balloon immediately after inflation. Every rope has then been “frozen” into a rigid bar, and the ordinary rules of architecture are in a way exactly reversed, for everything is pushing up and trying to “flare” toward the top. In a rigid airship the compression strength of the many single members of the frame becomes all powerful if it is aided by this force. Without the gas lift, a member of a rigid frame is strictly “rigid” only for a certain limited distance, as is so well shown in the sad collapse of the naval dirigible's body shown in the second picture, after deflation. Indeed, the frame of a rigid airship should by no means be so weak in itself as to break if a single central compartment should become deflated. The incident on the Zeppelin III trip to Berlin, 1909, when the flying blades of a burst propeller pierced the hull, without causing an accident, shows how much resistance it may offer.

This article was originally published with the title "Wreck of the British Naval Airship “Mayfly”" in Scientific American 105, 16, 333 (October 1911) 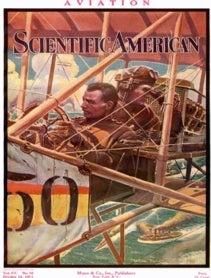