Now that you are fully stocked up on toilet paper, you must be wondering what to do with the cardboard tubes inside the rolls. This is your opportunity to put your hoarded supplies to good use by blowing the minds of your socially distanced friends and family. So grab some leftover toilet paper tubes, a pair of scissors and a mirror for an experiment that will change your perspective.

In the photograph, an arrow and its reflection point away from each other. Impossible, you say? The explanation goes back to the moment in which Kokichi Sugihara, a mathematical engineer at Meiji University in Japan, discovered what he thought was a bug in his software. After writing a computer program to produce 3-D models from architectural blueprints, Sugihara tested his software by feeding it impossible images: illusions such as the Penrose steps in M. C. Escher’s Ascending and Descending lithograph, which appear to go infinitely up and down. Sugihara reasonably assumed that his code would spit out an error when confronted with the impossible. Instead the program interpreted the illusions as possible objects that only looked impossible from a specific vantage point. That is when the mathematician became an illusionist.

Sugihara later incorporated mirrors into his illusory creations—for example, to make an object’s reflection seem incompatible with the original, such as with two arrows pointing in opposite directions. Matthew Pritchard, a British physicist and magician, recently developed the toilet-paper-roll variant of Sugihara’s arrow illusion that we feature here. To build your own version, all you need to do is cut the top of a cardboard tube in a simple pattern that makes it look like an arrow pointing to the same side no matter which way you turn it because of your perspective of the near edge versus the far edge of the tube.

To take your handiwork to the next level, prepare a dozen or so cardboard tubes cut in the same way and arrange them around the edge of your Lazy Susan or glass-plate microwave turntable. As the plate rotates, the impossible arrows never do! You can find the construction steps in Pritchard’s finalist video from the 2019 Best Illusion of the Year Contest.

Why We Didn't Know That Female Birds Sing 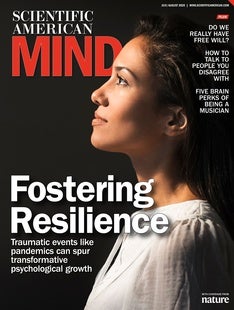