More than half of all known genetic lesions in cancer stop genes from working. The loss of function of genes that prevent uncontrolled cell growth, known as tumor suppressor genes, is particularly challenging to target therapeutically; it is difficult to stimulate the activity of a protein that’s faulty or simply not there.

Losing the activity of tumor suppressor genes has mixed implications for cancer cells. Some of these genes are involved in DNA damage repair, which the cancer cells need to maintain their rapid division and growth. In many cases, another gene can support these crucial functions, creating a weak spot that can be exploited therapeutically. “As cells become dependent on the activity of the compensating gene for survival, they become vulnerable,” explains Dr. Francesca Ciccarelli, a cancer geneticist at the Francis Crick Institute in London. By targeting drugs against the proteins of the compensating gene, it is possible to indirectly target loss-of-function mutations and treat patients bearing what were thought to be ‘undruggable’ cancers.

The strategy of finding pairs of genes that cause cell death when simultaneously inactivated is known as synthetic lethality. The first synthetic lethal pairing discovered involved the well-known BRCA1/BRCA2 genes, which occur in 30-40% of familial breast cancer cases and in up to 80% of hereditary ovarian cancers. When the DNA repair activity of either of the BRCA genes is impaired, cells become dependent on the parallel PARP pathway — making it a useful drug target. Since 2014, four PARP inhibitors have been approved for cancer.

Some patients are already experiencing the benefits of synthetic lethality-based therapy. Dr. Carsten Goessl, who is leading the clinical development of PARP inhibitors at pharmaceutical firm GSK, believes that these drugs could be used to treat a much wider spectrum of tumors. “The potential for this drug class has been underestimated,” he says.

In addition, scientists are looking for novel synthetic lethal gene pairs, as well as exploring the potential for combining these drugs with other treatment strategies such as immunotherapies. There are promising signs that synthetic lethality could offer new opportunities to not only delay disease progression, but improve overall survival in patients with different types of cancer.

There are several approaches that might extend the benefits of existing PARP inhibitors beyond patients with BRCA mutations. One is to use them for treating tumors bearing mutations in other DNA repair genes, such as PALB2 and ATM. If validated, this strategy could increase the number of patients who might benefit from PARP inhibitors.

Results from clinical trials of PARP inhibitors suggest there may be differences in the way drugs in the class work, including the biological processes they might affect. "Further research into the ability of PARP inhibitors to accumulate in tumors and change the immune state of cancer cells looks particularly promising for discovering ways to treat larger patient populations," says Dr. Axel Hoos, head of oncology research and development at GSK.

PARP inhibitors might also work well with other anticancer drugs. For example, by inhibiting PARP’s DNA repair activity, a tumor might accumulate mutations that make it more visible to the immune system. Combining PARP inhibitors with a drug that stimulates immune cells, such as a checkpoint inhibitor, could make them appropriate for more types of cancer. 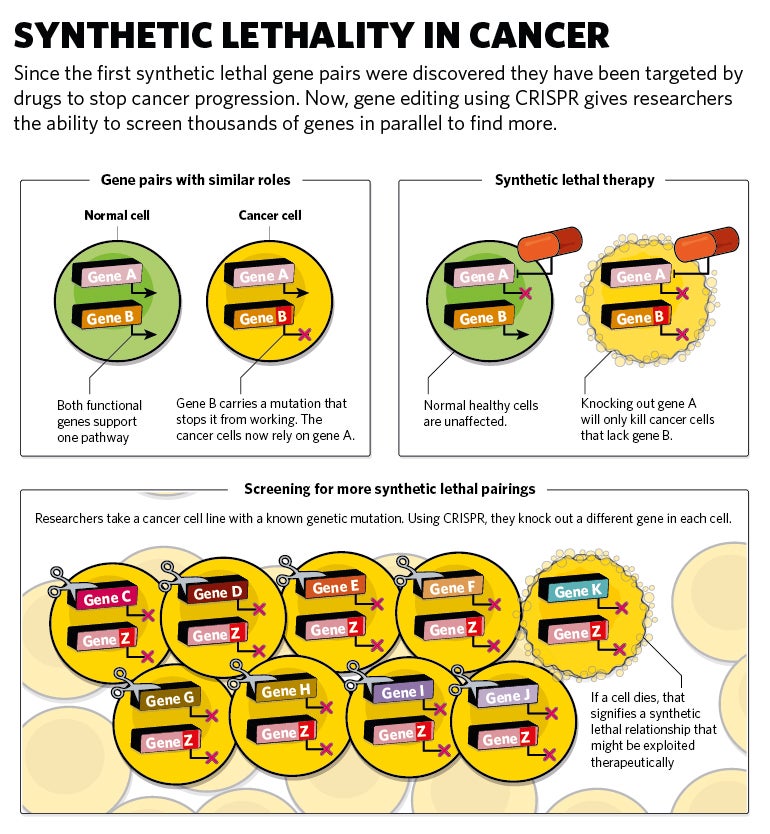 Scientists are also looking for new synthetic lethal gene pairs, thanks to advances in gene editing tools and next-generation sequencing. CRISPR allows researchers to systematically silence the activity of individual genes in cells that carry a known mutation. By examining the viability of each cell, they can identify new synthetic lethal gene pairings (see ‘Synthetic lethality in cancer’). Together with the growing knowledge of which mutations are commonly found in specific cancers, they can work out which genes are worth targeting for particular patients.

However, putting all these data together is a complex task. Dr. Ciccarelli’s team is using computational approaches and machine learning to analyze cancer genome data and prioritize drug targets. “We focus on genes that are highly mutated in cancer samples, then look for functional compensators that share sequence similarities or that encode proteins that have a similar function,” she explains.

Using these techniques, her group is one of several that has found new synthetic lethal gene pairs involved in repairing DNA damage, gene expression and metabolism. “Tumor-suppressing epigenetic modifiers are quite often damaged in cancer cells, and represent potential targets to treat many different types of cancer,” says Dr. Ciccarelli. Several agents that target synthetic lethal interactions among genes regulating chromosome structure and gene expression are currently being tested in clinical trials.

Synthetic lethality is one of several strategies leading to transformational anticancer drugs. To date, many of these treatments have demonstrated efficacy only in a select group of cancers and, even then, often in a minority of patients. As part of a combination therapy approach, synthetic lethality could improve patient response. “Having more types of treatment available will help oncologists choose the most effective combinations according to the molecular profile of the cancer,” says Dr. Ciccarelli.

Although finding synthetic lethal interactions has become a lot easier, the job of developing small molecules to turn into effective drugs can still be a lengthy process. Pharmaceutical firms are accelerating this process by teaming up with partners in industry and academia. “Synthetic lethality opens new opportunities to realize the full potential of precision cancer treatments,” says Dr. Hoos. “I expect the field of synthetic lethality will explode.”