The U.S. spends more on drugs than any other country, in absolute terms and per capita. Early prices of some brand-name drugs have reached shocking heights—some have topped $1 million for a course of treatment—and price increases tend to rise faster than the rate of inflation.

High drug prices create ethical dilemmas—especially in a pandemic, when the nation’s vast inequities in health care have taken on a new urgency. The fate of millions of Americans now rides on new treatments for COVID-19 and the prospect of effective vaccines. The more they cost, the harder it is for people to have access to them. High prices also require patients, insurers, and governments to make challenging choices in how to spend limited health-care resources. Determining when a price is appropriate for a new brand-name drug involves three fundamental questions: is the drug worth it, is it affordable, and is the price fair? Let’s take them one at a time.

The first principle of drug pricing is that a price should align with the value a drug provides—the benefit to patients and to health-care systems. Many countries determine whether a drug is worth its price by subjecting it to a process of evaluation to see whether the benefits are proportional. Such health-technology assessments in Germany, for instance, have helped reduce prices.

The U.S. does things differently. Many Americans tend to assume that markets will lead to prices that reflect willingness-to-pay, or the value of a good to someone. But drugs are different from most consumer goods. New drugs are invariably protected by numerous patents, which give the manufacturers market exclusivity. They have few constraints on how high they can set prices. Drugs are prescribed by doctors (meaning consumers often don’t lead the decision making) and, for the majority of U.S. patients, are paid for by insurance companies.

In many cases, such uncertainties make it difficult to evaluate the benefits of a drug. For example, the evidence on remdesivir, which is being used to treat patients with severe COVID-19, suggests that the drug reduces the time to clinical recovery by five days without a significant effect on mortality. However, Gilead, the manufacturer, set the price at $3,120 per course of treatment, which is less costly than five days of hospitalization. But it is not clear that the drug actually reduces hospitalization periods. In fact, some patients with COVID-19 reportedly are staying in the hospital longer to complete their courses of this intravenously administered drug.

A similar uncertainty has arisen in gene therapies such as onasemnogene abeparvovec-xioi (Zolgensma) for spinal muscular atrophy, which is listed at $2.1 million per patient, and voretigene neparvovecrzyl (Luxturna) for a form of inherited blindness, which is listed at $850,000 per patient. Short-term trials of the drugs suggest that they offer important benefits to patients with the conditions they treat, which is what led to their approval. But there is no evidence yet that the effects will be long-lasting.

So far U.S. payors generally cover these prices for gene therapy because they are indicated for rare diseases. But as more gene therapies are discovered for other conditions, the burden on health-care resources will quickly become unsustainable. Gene therapies priced like onasemnogene abeparvovecxioi for just 1 percent of Americans would cost $3 trillion—as much as all current spending on health care. While there may be conditions for which gene therapy offsets other medical spending, there is disagreement over how much of the resulting economic benefit manufacturers or society should be able to absorb, particularly in cases when taxpayer funding was a key driver of the discovery of the treatment. In such cases, drug prices should better align with their value, and if prices nevertheless remain high, they could be made dependent on the success of the treatment, with payments stretched out over time, rather than in a single up-front payment, and designed to end if the treatments stop working. 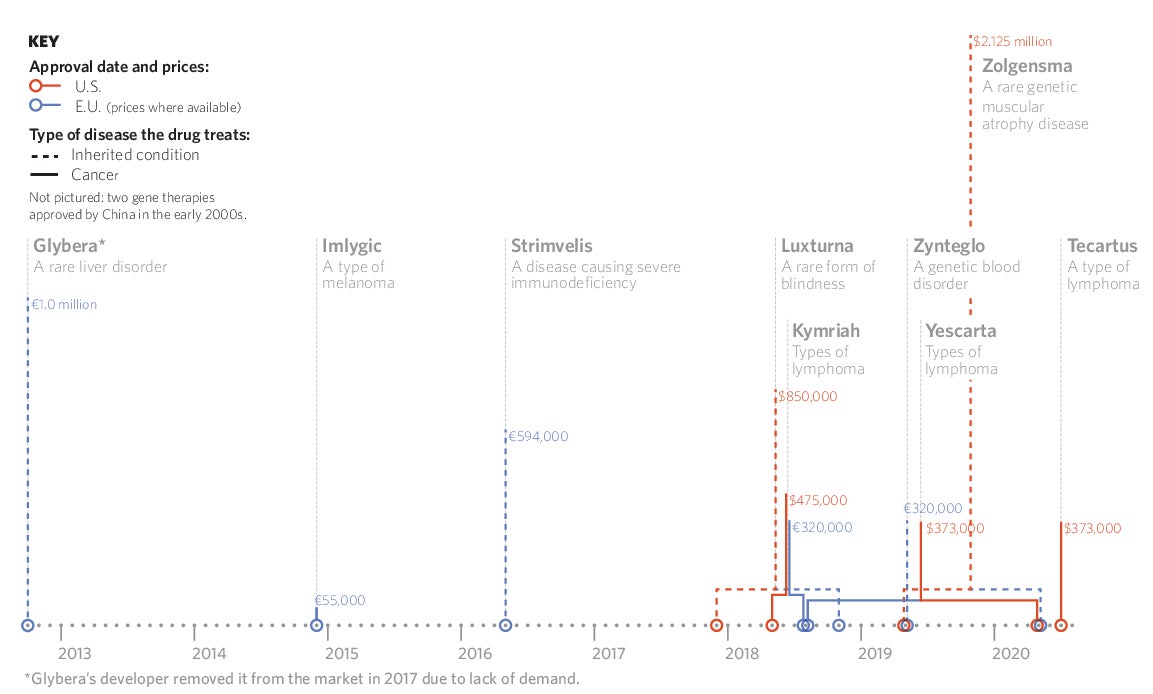 The second question is whether a drug or therapy is sustainable. Even when a drug is highly effective and offers good value for its price, it may still be unaffordable to the health-care system. This was the case with antiviral treatments for hepatitis C virus infections. Sofosbuvir (Sovaldi) was considered cost-effective even at its launch price of $84,000 per course of treatment because it offered a high cure rate. Because hepatitis C is so prevalent in the U.S., such a price would overwhelm payors like Medicaid that cannot afford to treat all of its patients without neglecting other medical needs. Money spent on sofosbuvir is money that is not available for other health-care needs or budget priorities. This issue may also arise when a COVID-19 vaccine is approved, because successful management of the virus will require widespread administration of it. Should COVID-19 vaccine manufacturers be able to set their own prices? Or should the federal government insist on a reasonable pricing structure as a condition for receiving billions of dollars in grants for vaccine development and testing? So far it has avoided the issue in deliberations over vaccines.

High-priced medicines can also exacerbate healthcare inequities. For a drug like sofosbuvir, limitations in Medicaid that were designed to control costs could end up widening the disparities between Medicaid patients and those with private insurance plans.

Taking budgets into account when negotiating a price is reasonable. The Institute for Clinical and Economic Research (ICER), an independent organization in the U.S. that assesses the value of some expensive drugs, considers a drug’s impact on budgets, which is important in setting policies that ensure access to them. More U.S. payors, including the Veterans Administration, New York’s Medicaid program, CVS, and some private insurers, have reportedly started collaborating with ICER to integrate its reports into their price negotiations. As federal, state, and private health-care payors consider the introduction of COVID-19 vaccines or widespread treatments, their impact on budgets is an important consideration. Since these drugs will be used by virtually the entire population, even low prices can have a significant budgetary impact.

The third key question is whether the price of a drug is fair. Manufacturers in the U.S. have argued that they should be able to recoup the cost of development and production and be compensated appropriately for risks in up-front investment. In recent years, however, public institutions have branched out from supporting basic and translational science to paying for later stages of drug development. About a quarter of new drugs approved by the FDA in the past decade had late-stage connections to publicly funded institutions. For example, one of the first CAR-T therapies approved to treat cancer, tisagenlecleucel (Kymriah), was developed in a collaboration of Novartis and the University of Pennsylvania, which received more than $200 million in taxpayer funds for the research. Given the substantial public investment, is the launch price of $475,000 fair? In the development of remdesivir for COVID-19, the federal government supported the key pivotal trial that showed its efficacy and its emergency-use authorization. Even though the government invested in the drug and took significant risks in its development, it played no significant role in setting its price. Efforts have been underway in the U.S. to integrate these three key principles into systems of drug pricing. New York, Massachusetts, Maine and other states have adopted drug affordability boards to assess drug value and help state insurance programs better negotiate fair prices with manufacturers. While these are promising developments, action on the federal level will be needed to support the states and extend these principles to Medicare, which covers about one-third of U.S. prescription drug spending. President Trump promised such reforms during his 2016 campaign but dropped them after conferring with pharmaceutical-industry lobbyists, only to issue executive orders in July aimed at curbing high drug prices that have yet to take effect (and are designed to only have a limited impact if they do). The most advanced effort thus far has been the Elijah E. Cummings Lower Drug Costs Now Act, passed by the House of Representatives in late 2019, which would allow Medicare to negotiate prices for the most expensive brand-name drugs leveraging value determinations made in other comparable high-income countries around the world.

The U.S. practice of allowing manufacturers to set prices creates problems for patients and is unsustainable for health-care payors. Recent changes at the federal and state levels are a first step in better aligning benefits and costs.