Before the end of the year, employees at Ubiquitous Energy, a company in Redwood City, Calif., will gather in a window-lined conference room to stare toward the future.

That’s because their new glass panes will offer more than a stunning view of the arid mountains and blues skies of the North California landscape. They will also double up as solar panels, able to power the company’s lights, laptops and air conditioners.

Several years in the making, Ubiquitous’s energy-generating glass is a neat technological feat. Its power lies in the layers of organic polymers between sheets of glass. Some of them permit all light to pass through while others absorb photons of non-visible infra-red and ultraviolet light. As light enters the window, the flow of electrons between the polymer layers creates an electric current, which is then collected by microscopic wires in the glass.

Right now the windows produce about a third as much electricity from a given amount of sunlight as the typical solar cells used in roof panels, and they’re about half as transparent as ordinary glass.

But those specs are already enough to make the windows a viable product, says Hardev, adding the company is likely to improve the transparency significantly. As for the lower output of electricity, he notes that windows can cover a much greater surface area than a roof, so the sheer number of windows will swamp the electrical production from a rooftop full of higher-efficiency solar panels. “You could do both,” says Hardev. “But you’ll get more from the windows.”

The biggest challenge, he adds, is scaling up the windows from less than two square feet currently to about 50 square feet. 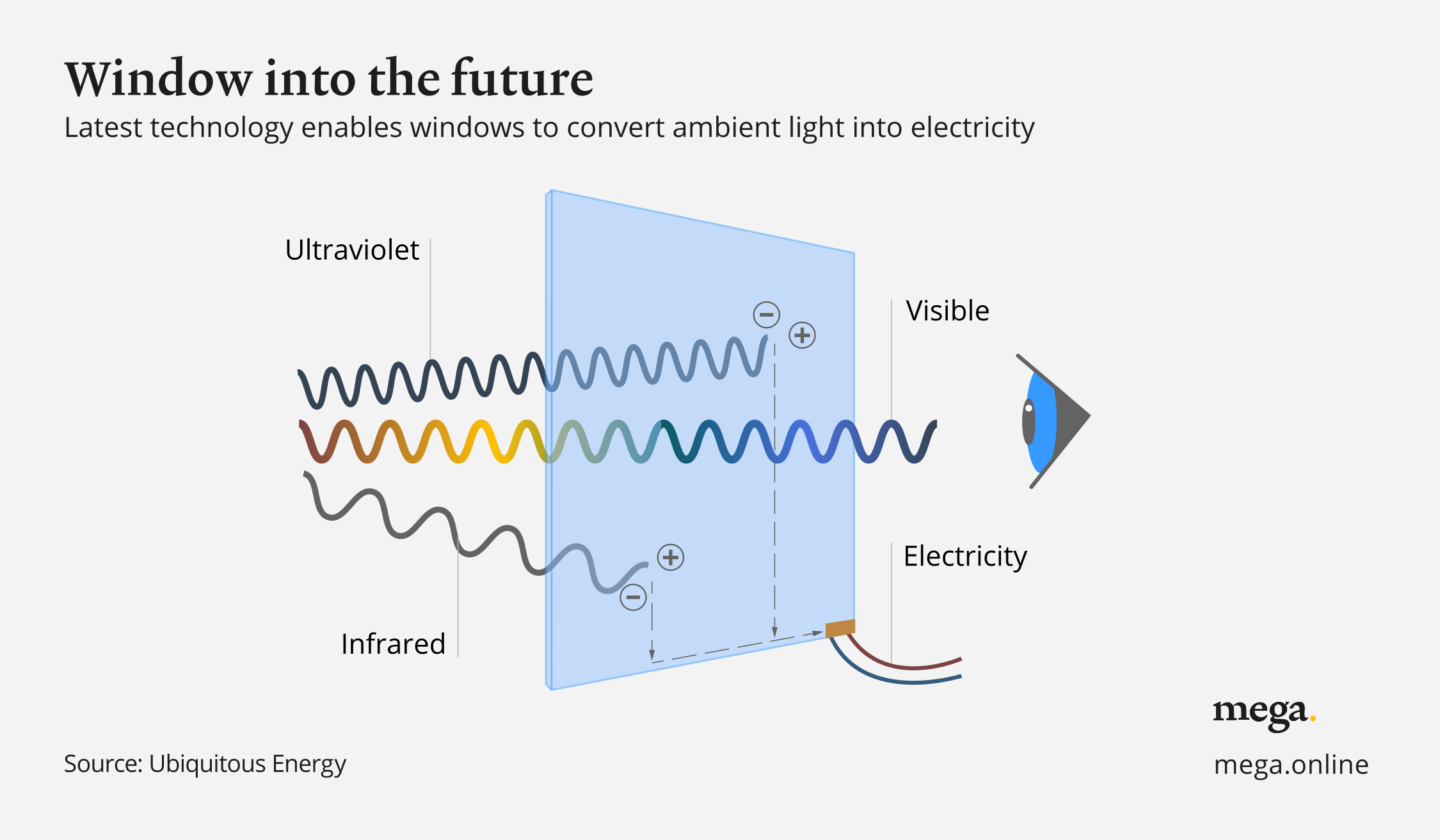 The window revolution is long overdue.

With the world’s metropolises rediscovering their love for skyscrapers, gleaming towers have evolved into fixtures of every cityscape. But the glass that covers them has hardly evolved at all.

Temperature control is a big challenge. Eighteen percent of the money spent in the US on energy goes to heating and cooling buildings. Of that, about $20 billion literally goes out the window on cold days, and even more leaks back into air-conditioned buildings in the summer, according to the Lawrence Berkeley National Laboratory. All told, over half the money spent on heating and cooling buildings is lost through windows.

To improve on both insulation and heat-reflection without compromising the clear view, Michigan-based Mackinac Technology is developing a thin sheet of multi-layer, coated plastic that is placed over ordinary window glass. The layers of plastic trap air between them to boost insulation, while the coating reflects infra-red rays--the type that carries most of the heat energy--but lets visible light pass through.

CEO John Slagter claims that the Mackinac window is actually clearer than glass. The secret, he says, is in its invisible coating, which permits the plastic surface to reflect less light than glass. That, in turn, increases the amount of light that passes through the window, improving clarity.

Held in a frame that attaches to an existing window, the sheet can quadruple the insulating capabilities of either single-pane or double-pane glass, yet is light enough not to add significantly to the weight of the window.

The material has been successfully tested on windows at Calvin University in Grand Rapids, Michigan, says Slagter, and will be rolled out in larger pilot projects before launching to general availability in 2022, thanks in part to funding from US government agencies.

A matter of light and dark

There are times when high clarity is a problem rather than a solution--namely, when the south-facing windows of a building transmit sun glare.

“Bright sun can help heat a room, but people don’t like working in full sunlight, and may not even be able to see their computer screens,” says Michael McGehee, a materials science researcher at the University of Colorado at Boulder. “They usually end up putting the blinds down and leaving them there, losing the view and all the benefits of sunlight.”

To keep the sunlight while losing the glare, McGehee’s group has been working on improvements to “electrochromic” windows. Their goal is a window that can darken at the flip of a switch to filter out the worst of the glare, while letting just the right amount of sunlight through for comfort. To do that, McGehee’s windows incorporate a layer that combines indium tin oxide with platinum, and a second layer of nickel oxide, with a solution of lithium between them. When a small voltage is applied across the two layers they act as electrodes, producing an electric field that causes lithium ions to move through the solution and cling to the nickel oxide layer.

Though the lithium is transparent in solution, when it coats the nickel oxide it becomes semi-opaque. “You only need a 10 nanometer layer of lithium on the electrode to block most light,” says McGehee. The result is a window that acts as “sunglasses for a building,” as he puts it. What’s more, varying the voltage allows dialing in a particular level of darkening.

If these projects turn out to be commercially successful, windows could be an important part of smart cities that are both convenient and green in another decade or two. That would be a step towards reducing humankind’s carbon footprint to zero