In the Netherlands, renowned for its canals, bridges are a common sight. But four bridges in particular are construction oddities: each 26-foot structure was fashioned from concrete by a giant robotic printer.

They are part of a revolution that is seeing 3D printers, which extrude plastic and other materials to build up solid objects, move from the tabletop to the construction lot. Since 2017, several companies and groups in the U.S., Europe and Asia have ‘printed’ bus-stop shelters and convention-hall partitions, as well as entire homes.

The techniques of 3D printing are still in the early stages, but commercial-grade printers could radically change the construction business in the next decade. Experts believe they could cut construction time in half, reduce costs by as much as a third, and offer greener, sturdier designs, with more scope for customization.

As the technology takes off, the global 3D printing construction market is forecast to reach USD14.9 billion by 2026 from just USD4.6 million in 2019, according to Polaris Market Research.

A Jack of All Trades

3D construction printers work a lot like home-office inkjet ones, except instead of ink they spit out concrete. Nozzles run back and forth on rails, with computers controlling the pattern of extrusion, so that an inch-thick layer of concrete (or steel or other material) is laid down precisely where needed. By the time the slow-moving nozzle reaches the end of its path, which can be up to 100 feet long, the layer has usually hardened just enough to lay down another on top of the first, building up, layer-by-layer, a home-sized wall. With precise pattern of deposit, the nozzle can leave spaces for windows, doors, utility conduits, and other design and structural elements.

One of the most obvious advantages is speed. It takes about 24 hours of printing to build a 500-square-foot single-floor home. “The printing process delivers structure, insulation, wall-sheeting, interior and exterior surface finishing, and the conduit system, all at the same time,” says Jason Ballard, co-founder and CEO of ICON, an Austin, Texas company focused on 3D-printing-based construction. “That normally takes 20 people representing five or six different trades working several days.”

3D construction printers are also less wasteful. A typical home construction site generates about four tons of waste. Because the concrete used in conventional slab construction is applied uniformly, regardless of whether it’s needed for structural support in a particular area or not, about half of the concrete is wasted. That’s especially damaging to the environment because cement, the main ingredient of concrete, accounts for about seven percent of our carbon dioxide emissions. 3D printers, by contrast, can vary the thickness of a structure with great precision, using concrete only where it is really needed — a process called topological optimization.

Another advantage of printed construction is that it’s digital, which means a design rendered on a computer gets converted directly into instructions for the printer. That eliminates the need to transfer designs to paper blueprints, which are then open to interpretation by tradespeople — an error-prone process that often leads to cost overruns and delays.

The digital-to-digital approach has the added benefit of removing barriers to design creativity.  An architect can offer custom or semi-custom designs more cheaply, without having to worry about training tradespeople to execute a novel plan. “The printer doesn’t care what design you come up with,” says Theo Salet, a structural engineer at the Eindhoven University of Technology, a pioneer of printed construction who built the Amsterdam bridges. “It won’t charge you more for being original.”

So far, printed buildings have been modest, low-cost affairs. For instance, ICON printed a dwelling in Austin, Texas, intended for families, at a cost of $10,000, and has a contract to print a total of six. Then it plans to take a printer down to Latin America to build 50 low-cost homes there. Salet, meanwhile, is about to start working on a 90-foot bridge in Amsterdam, and is also in a partnership to build several homes in the Netherlands. 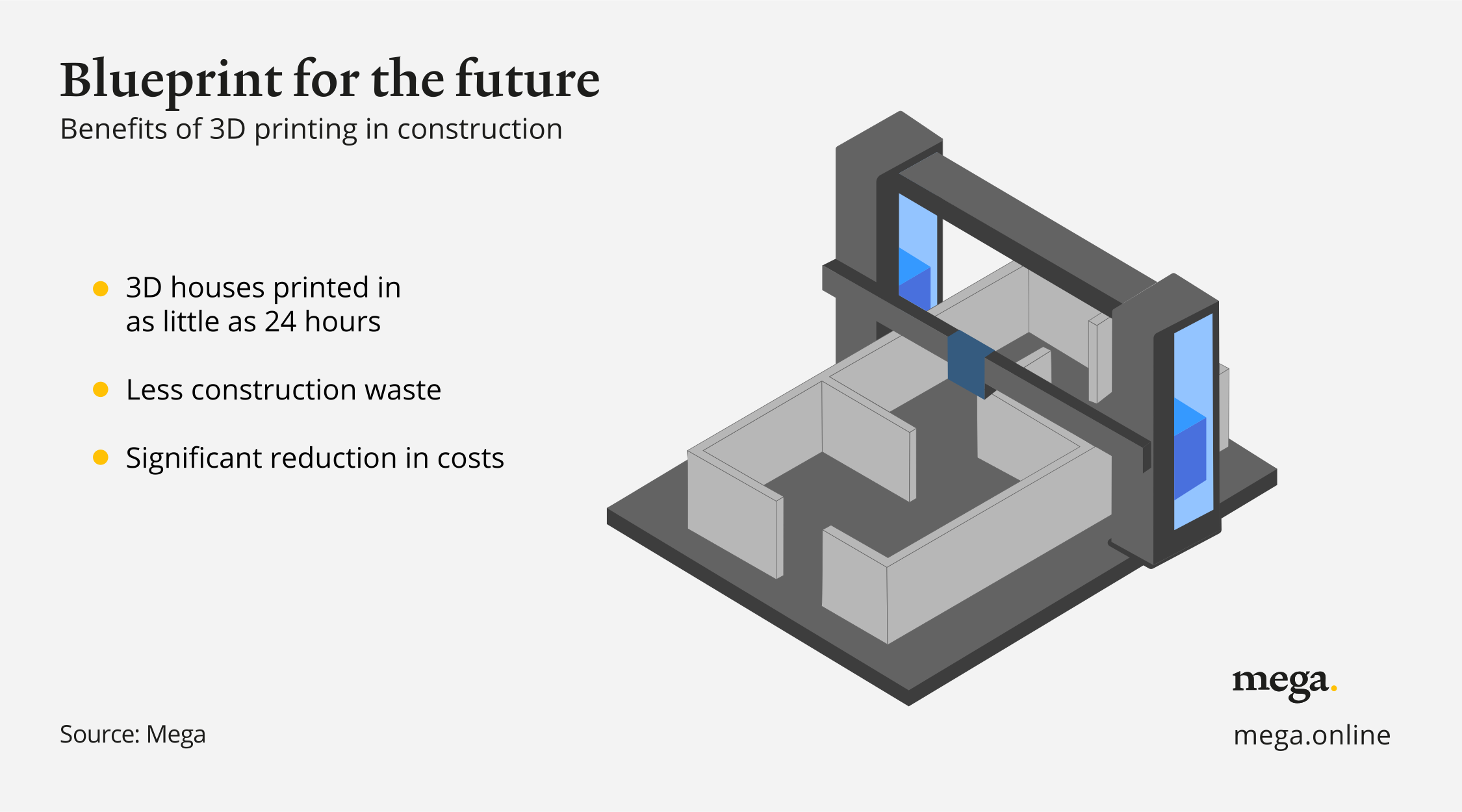 A blueprint for the future

To scale up production, more work is needed in technology and regulation. For the former, practitioners haven’t yet found an efficient way of reinforcing concrete from a printer. In conventional construction, that’s done by laying down steel reinforcement bars. Some developers are experimenting with using a second robot to lay down steel bars in each newly deposited layer. In other schemes, the main printer shoots out metal or plastic wire a few millimeters thick along with the concrete. Neither approach has yet proven optimal.

The big hope is that new concrete formulas, or even new extrudable materials, will eventually be strong enough to do away with reinforcement. Epoxy, for example, is one potential candidate. It is a type of polymer currently used in adhesives and coatings in manufacturing and construction. Or there are other options. “From a more radical perspective, I’d like to work with a biomaterial,” says Salet. “But we just don’t have the skill set to work with it in construction yet.”

Safety rules also need to finalized, with set guidelines for the inspection of 3D-printed houses and rules on construction procedures. If inexperienced, incautious builders get access to printers, their structures could be in danger of collapse, warns Salet. “You have to make sure the bonds between the layers are strong enough, and that takes a lot of knowledge,” he says. “I fear that someone will buy a printer and decide to build a bridge, and then wait too long between layers, leaving weaker bonds. One incident will give the whole digital-concrete industry a bad name.”

There is progress, however. Ballard, for instance, is working with inspectors, insurers and federal mortgage agencies in the US, who are all part of the process needed to make printed homes a legitimate option for most potential buyers. “It’s taking them a little bit to get their heads around it,” he says. “But I think they’ll see there’s no way a conventionally built structure can be guaranteed as sound as ours can be.”

Read more about technological advances in agriculture and other fields on Mega.online. Mega seeks to energise and enrich the debate over how to create a better functioning economy and society with articles and videos featuring leading academics, scientists and entrepreneurs active in the fields of sustainability, technology, health, alternative energy and agriculture.